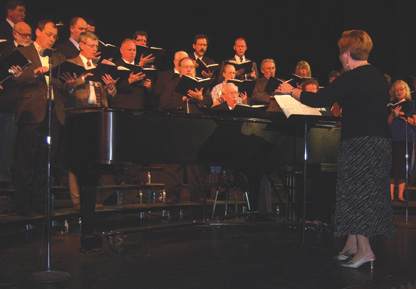 The theatre at Cameron University recently filled with veterans, students and other members of the Lawton community to hear the varying styles of the Lawton Community Band and Choir.

Cameron students, faculty and staff performed with the ensemble during a spring concert at 3 p.m. Sunday, Feb. 28 at the Cameron University Theatre. Starting off the concert, CU choir students and alumni joined new voices with the Lawton Community Choir as they were accompanied by an array of instruments by fellow Cameron musicians and the Lawton Community Band.

Conductor of the Cameron University/Lawton Community Choir Doris Lambert is also an Adjunct Professor of Music at CU.  The choir sang selected excerpts from “The Creation” by F.J. Haydn. Doris says the main reason for choosing the piece was to honor Haydn’s memory, thought they were a little behind on the celebration of his life.

“Last year, 2009, was the 200th anniversary of Haydn’s death,” she said. “So, all across the world actually, there were concerts of his symphonies, his chamber music works and his choral works celebrating his life and his music. Even though we did not make 2009, we decided to perform this in the spring.”

The interaction between both Cameron students and Lawton’s community worked very well, Doris said. The relationship between the two choirs became a building block for each person to recognize and become a part of a bigger whole.

After the CU/Lawton Community Choir sang, the band came on stage and started out with “George Washington Bicentennial March” which was more of a battle march to display the patriotic side that the band also ends with. Then the “Suite for Winds and Percussion” was played, followed by “Quatre Fantasie”. Music Department Chair and Conductor of the CU/Lawton Community Band Dr. Jim Lambert says he selects particular music based on the style and age of each piece.

“I am a reviewer of new music for an instrumental magazine,” Jim said. “I write the reviews of new music and three of the pieces were brand new pieces that have not been performed in Lawton before.  They are the ‘Suite for Winds and Percussion,’ ‘Quatre Fantasie’ and ‘Battle Hymn of the Republic.’ I break down the concert essentially into three components.  The first part is so-called serious music with the second one being a pop band music type. The last component is a patriot tune.”

“The patriotic piece is obviously for the armed forces,” Dr. Lambert said. “We live in a military community so it is a tradition for this group to honor our armed forces.”