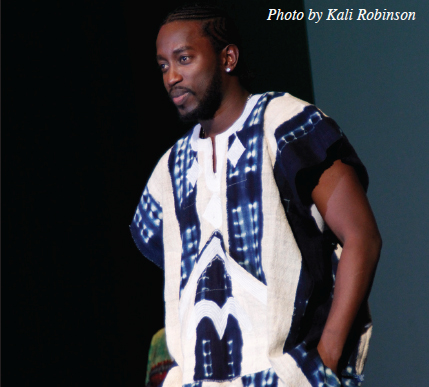 Lights cast a teal glow across the stage as steel drums played through the sound system, setting the mood for audience members while they found their way to their seats. A spotlight appeared, illuminating Eloise Hubbard, who would serve as Master of Ceremonies for the evening.

Hubbard greeted guests with the words, “Close your eyes and drift with me, to a sublime little shop next to the sea,” as Cameron University’s CU@Fashion Week 2013 “Rock the Wear” Fashion Show began.

A former Miss Black CU and contestant in the Miss Black Oklahoma pageant, Mitchell has seven years of experience in coordinating fashion events.

“This is an idea that just developed in my head,” Mitchell said. “I’m very spontaneous with events, and I love event planning. It was just one of those ideas, and I ran with it.”

Before the show, Vice President Jennifer Holland helped students to set up plants to decorate the stage that would serve as the evening’s runway.

Vice President Holland explained her reason for attending, as two of her daughters would be walking in one of the segments.

“I’m so excited about the fashion show,” Holland said. “We got to go to the dress rehearsal last night, and it’s going to be really great. There is a lot of great music. They didn’t bring out all the fashion last night, so I’m excited to see it tonight.”

The show was divided into 13 segments, which were broken up by both dance and vocal performances. 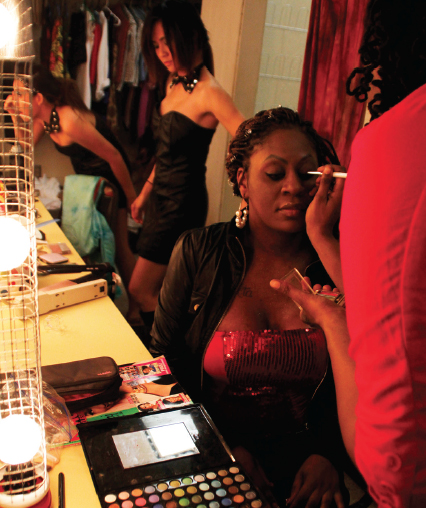 Each segment featured its own title and theme, ranging from “Shades of Blue” to “Caribbean Paradise.” Others, like “African Wear — From the Motherland They Come” served to educate the audience on the importance of color in African clothing.

After Hubbard shared a brief history of the growth of Cameron’s international program and issued a round of thank yous to all those who contributed, she introduced the first segment, entitled “Glam Rock.”

Helix’s “Rock You” kicked off the show as a model strutted across the stage to the beat, working the crowd in rock and roll fashion — in knee high black boots, silver leggings and a studded leather vest. She threw up classic “rock on” hand signs as she posed before returning behind the curtain.

Following “Glam Rock” was the uniform segment, which featured girls of variant ages as well as males. To allow time for changes, Hubbard gave a history of school uniforms and discussed the debate over mandating school uniforms today.

Without advocating any side, the segment began with an elementary aged schoolgirl sauntering across the stage in pigtails and a checkered uniform reminiscent of an earlier day.

Despite their young age, the girls maintained their stride throughout their part. As the segment concluded, Hubbard called for a round of applause for the models. 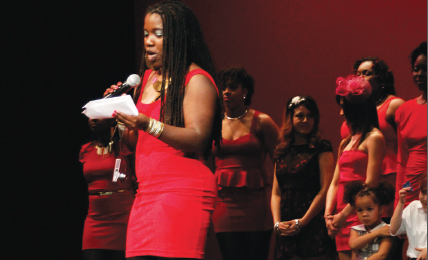 After the first three segments were finished, the first guest group made their way onto the stage. “The Beautiful Wahines,” a Hawaiian dance group, performed with leis adorning their necks and wrists.

The last several segments featured the collections of budding designers, such as: Kiwie Dan Couture’s “From Fashion to Figure,” “Collections of Brown Sugar,” “Silhouette” by Neisha La Touche, “Afri-Fashionista” by Naturally Royal, and designs by Maxine Revans-Walters.

Economy of Style, a blog about style on a budget, issued a challenge for the models to style an outfit “exuding spring’s hottest trends.” Molly Beauchamp was the winner in a pale pink lace top, light blue skirt and nude heels.

The stage faded to red as “Go Red with a Touch of Pink,” the final segment, was introduced. Models paid tribute to their friends and family who have lost the battle to heart disease. After an emotional display by the models, Hubbard issued a final round of thanks for the evening.

Make-up artists and models took to the stage for a courtesy bow.

Following the show, Mitchell expressed her pleasure, saying: “I feel really well. I think the show was a success, and I can’t wait until 2014.”

For those not able to attend, the show was available for live streaming on the Internet. Videos of each segment are available on the show’s Facebook page.