The CU Theatre Department is getting ready to close the curtain on their spring season with their final production, “The Drowsy Chaperone,” the final play of “A Year of Manner and Comical Mishaps.”

“The Drowsy Chaperone” is a Broadway musical written in the late 1990’s that satires musicals from the 1920’s and 1940’s but still manages a modern feel.

The musical opened on Broadway in 2006 and received a Tony Award for “Best Book and Best Score.”

The production’s director, Scott Richard Klein, said the musical is a show within a show, and the entire play takes place in the narrator’s apartment, who he referred to as “The Man in the Chair.”

“He likes musicals, and he’s drifting back and remembering when he went and saw a show called ‘The Drowsy Chaperone.’” Klein said. “He takes out an album and puts it on a record player and as the music starts on the record player the characters start to come out of his apartment.”

The musical the Man in the Chair is remembering is a comical love story that takes place during the day of the wedding of Broadway actress Janet and an oil tycoon by the name of Robert, portrayed by Katelynn Grace Meeks and Brandon Landers.

“The plot of The Drowsy Chaperone is that Robert and Janet are going to get married and Janet’s producer does not want them to get married,” Klein said.

Janet’s producer does not want the couple to get married out of fear that Janet might quit after she gets married. The producer does everything he can to keep Janet from marrying Robert to prevent losing his Broadway star.

Klein said that since the play is set in the narrator’s apartment, the characters of the play do not enter or leave the stage in a traditional manner.

He explained characters will enter and leave through backdoor exits set behind certain appliances and furniture within the apartment.

“There will be a bed on stage left, and it’s a Murphy bed so it will come down, and at one point we’ll bring it down and there will be a character on the bed,” he said. “These characters can pop out of anywhere and when we go to the garden scene we are going to get rid of the whole back wall and bring in another set.”

Klein said he believes the show within the show concept will add to the humor of play as there are moments The Man in the Chair will speak to the audience as if they were guests in his apartment. There will also times the characters will stutter when the record sputters and stalls as if stuck, and the narrator must fix the record to allow the show to resume.

Klein said one of the greatest challenges the play has given the stage designers is how to bring a plane onto the stage during the final moments of the production. He said that his crew has designed the plane in a cartoonish style.

“It’s not quite on the same token as the car was in Grease last year,” he said. “The plane is divided into two parts; one part is a platform unit which they will roll the pilot on which has a cloud and then we’re going to f ly in the propeller and wings,” he said.

Klein said he believes the audience will easily relate to plot of the production, with its story on love and comical charm.

“It’s fun and it’s boy meets girl, boy loses girl and boy gets the girl back again, and anybody who’s been in love knows that routine more than once probably before they finally walk down the aisle,” he said.

“The Drowsy Chaperone” will open at 7:30 p.m. on Thursday April 18 at the CU Theatre. Tickets are $10 for military, senior citizens and Cameron faculty and staff, $12 for all other adults and free to students with a valid CU ID. 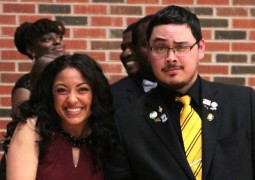 New Coaches at the Helm for Basketball, Softball

0 thoughts on “Wake up: The Drowsy Chaperone”