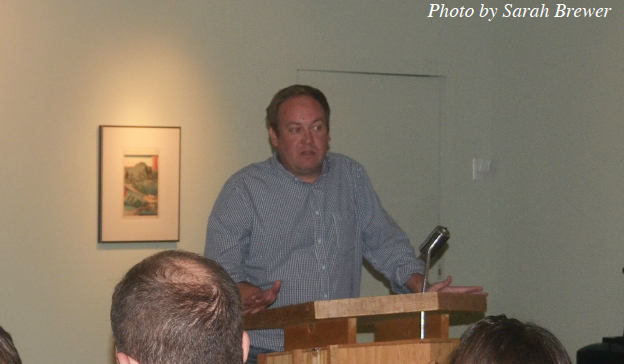 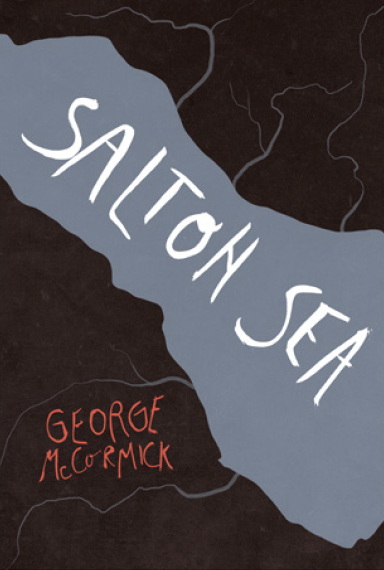 English department faculty, students and friends gathered on the evening of April 12 at the Leslie Powell Gallery to join the Creative Writing Instructor in celebrating the long-awaited release of his short-story collection, “Salton Sea.”

Recently published by Noemi Press, “Salton Sea” has thus far won the 2011 Noemi Book Award for Fiction. One story in the book, entitled “The Mexican,” won the PEN/O. Henry Award for 2013. Its other stories appear in Epoch, “Hayden’s Ferry Review and Santa Monica Review.”

Following an introduction by Assistant Professor Dr. Godsave, McCormick read “DC,” one of the short stories he included in his anthology. McCormick said he found inspiration for “DC” in a letter from a friend, writing it in the same honest, intimate voice his friend had used.

“I remember that honesty and being astonished with the way literature can show up in the most unlikely of places,” McCormick said.

He then read a chapter from his new novel. In the chapter, a photographer moves from Southern California to Oklahoma and teaches five sections of photography at a local fictional community college in Lawton.

He said his inspiration for his novel came after immersing himself in the work of Wichita Falls photographer Prank Gohlke — a leading figure in American landscape photography who has been exhibited his museum in museums all over the world — McCormick began to develop an aesthetic for the southern plains.

“When you look at the photographs, there are very few people in them, but they are highly expressive and the way he was able to take photographs of what was normally very static landscape and somehow imbue them with a kind of yearning and emotion in high art,” he said. “So for me, photographers of the area are also amazing writers that write this beautiful nonfiction that I like.”

McCormick said his work is experimental because its narrator controls what the reader sees through the lens.

“There are times when the photograph will be an empty frame on the page, but you never get the content of the photograph. You only get the photographer talking about his own work. That was interesting to me — his relationships with work as opposed to what we might see.”

His work also broaches questions of artistic subjectivity and objectivity. The narrator follows a student who crosses a set of train tracks and disappears into a concrete drainpipe.

“He is fascinated by the subject, but what does he take pictures of? He takes pictures of the drain pipe, the grain elevator, the dust — but he won’t take pictures of the boy. And that really intrigued me: that he was breaking some kind of ethical or social contract or something and that he wouldn’t go, ‘that’s my subject and I have to exploit him.”

Another example of objectivity in his work occurs when the narrator takes photographs of a derelict house on the edge of town.

“To him, it is the epitome of sadness and he’s taking photographs and one of his students walks out and he seems him take photographs of his house. In that moment, he realizes he does not understand who his students are.”

Writing from the perspective of this character enabled McCormick to discern the differences that distinguish photography from other artistic mediums.

“Those questions come up in photography in ways that are more immediate that I think are in fiction writing,” he said. “Because in fiction you can say ‘eh, I made it up,’ and a photographer says, ‘that’s somebody.’”

He is not yet sure if he wants to publish his as-yet untitled book, but McCormick said he feels he is writing the kind of book he wanted to read five years ago before moving to Lawton.

“It will probably be 180 pages but that is all it needs to be,” he said. “It’s one of the few projects I’ve ever worked on that, when I sit down to write, I already know what I am doing next without planning. As long as I concentrate long enough, the pages always come. It feels good.”