When the English Department sent me an e-mail asking me if I was interested in campaigning as the nominee for Homecoming Queen, I paused, overcome with elation and the kind of terror that seems too frivolous to me now — but I had nothing to wear.

Other than making an appearance at another event scheduled that week, my duty as a nominee was promenading down the court during the halftime coronation ceremony where one female student would become the CU Homecoming Queen.

I wanted to look as regal as the role might require — despite keeping a collection of formal dresses from similar occasions in my closet, none of these outfits fit, and so plans for a shopping excursion were made.

I scoured rack after rack looking for something that would fit. I was accustomed to slipping into something little, but when the first dress was too little and the sizes embroidered on the tags began rising, I brushed back my tears and convinced myself that there was nothing wrong with me.

This would not do. I was ready to concede before the campaign had begun, but my mother suggested that I look once more at the options stashed in my wardrobe.

Between a clover-green bridesmaid dress and a paisley-print maxi dress, the little black dress I had worn for Halloween years ago had been draped discreetly on a hanger where it would remain out of sight and out of mind.

Peeling the little black dress from closet, I reminisced about the story. I wanted to play the part of a masked harlequin clown that night, and the sequined-embellished, one-shouldered sheath conveyed the look of mystique and mischief associated with these characters. I remember seeing it online and immediately wanting to wear it for one night of revelry in Oklahoma City.

When I tried the dress for the first time, it was far too lose for me — for my less than lithe frame — and I felt as foolish as a jester while my friends and I traipsed around town. However, the joke — or fault, really — was on me.

For reasons I cannot fathom now, I had subjected my body to a rigorous exercise regimen and substantially reduced the fuel my body needed to complete the outrageous demands.

I consumed fewer than a thousand calories during the day and ran as much as ten miles during the night hours for months. I was constantly doing arithmetic in my head — adding and subtracting numbers — to ensure that my hips would eventually meet a certain measurement. I aspired to become a size zero — a size nothing.

My excessive concern for my body image had manifested into a disorder that was poisoning me from the inside and gradually weakening the other physical, visible parts of me.

When others took notice of my changing figure, I changed tactics so those closest to me would not suspect that I was susceptible to an eating disorder.

My co-workers would bring me these decadent, molten chocolate cakes to snack on during my shift, but I saw through their ruse. I would occupy myself with some task, leave the cakes in the refrigerator and feign forgetting so I could avoid eating something I was secretly craving. I was denying myself an otherwise innocuous treat and the sustenance my body so desperately needed.

When my friends and I would hang out — and when the Oklahoma wind came sweeping down the plain, they joked about it sweeping me away with it — but both of my feet were planted firmly on the ground and I was pleased with the control I had taken to forge a figure that was my own.

But when my family members made comments with what I perceived was criticism but understand now was care, I wanted to withdraw from them altogether — especially during meals — because I failed to see what they saw. I had become less substantial than my own shadow, but I thought I looked like a super model. I was blind.

And yet, they were there for me after an infection seeped into my lungs and caused me to cough without end. My mother rushed me to the clinic where my physician told me that my health was at risk. His concern was at the last the impetus for my recovery.

Flash forward three years later, and lo and behold! The little black dress fit where it once fell over my figure. Confidence had come from gaining weight and respect for my body.

Regardless of the outcome of the coronation ceremony in the Aggie Gymnasium, I felt as lovely as a princess could feel standing among the pantheon of students that were recognized by for their achievements.

I did not leave the court with a gleaming tiara atop my head, but this Homecoming experience affirmed that I am much stronger when I love my body for being healthy. 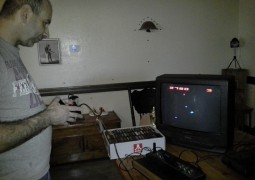 0 thoughts on “Voices: How a little black dress led to self-love”