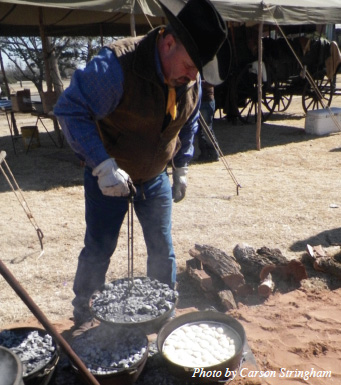 The Cameron University campus was recently the site of the second annual “Chuck Wagon Cook Off” as part of the Homecoming festivities.

At 12 p.m. on Feb. 16, the grounds between Burch Hall and the Aggie Gym were turned into an Old West-style cooking competition between three teams: Snake Creek Cattle Co., made up of Cameron Alumni; Bar CU Ranch, comprised of Cameron Faculty; and the Dust Bowl Diner, a group of Cameron Agricultural students who decided to break off from the faculty team this year to try their hand at cooking on their own.

The day started at 5 a.m. as the teams got their fires going; since a portion of the cooking was done with Dutch ovens, this step was a necessity. Each team was asked to prepare a meat dish, a potato dish, a type of bread and a cobbler for dessert, all while using only the cooking utensils and cast iron equipment that were standard issue for a chuck wagon cook of the old west.

Last year, there were only two teams competing — the Alumni’s, and one that combined the efforts of the faculty, staff and students. This year, however, the students decided to strike out on their own, giving the event another team and another wagon.

The event exceeded expectations with the number of people in attendance. Dr. Leon Fischer, Chair of CU’s Agricultural Department and Wagon Boss for Bar CU Ranch, said that seating had been set up to accommodate 300 attendees; however, as the serving lines opened and people began to sit and eat, there was not enough room at the tables. Many who came to the event ended up sitting on haystacks or the ground in order to eat.


While he was pleased to see the growth of the event since last year, Dr. Fischer said that he was already thinking of ways to improve the cook-off for next year.

“We may end up having to rent another wagon next year,” he said. “We can’t seem to cook and serve enough food fast enough for the crowds that come through here.”

If the logistics of obtaining another wagon work out for next year, Dr. Fischer said he may consider splitting up the faculty from the staff in order to make a fourth team.

Dr. Fischer also said was proud of the Aggie students for their willingness to run their own wagon and the hard work they put in to not only the cook-off, but also in the Homecoming events held that week.

River Mitchell — a junior Agricultural Business Management major and Wagon Boss for the Dust Bowl Diner — said that for him, cooking on a chuck wagon was almost second nature.

“It’s something that I have done since I was real little,” Mitchell said. “I think I have quite a bit more experience than some of my competitors; I’m 21-years-old and my family has been cooking on a chuck wagon as long as I’ve been around.”

Mitchell also said he was proud that his team was able to complete their meal 30 minutes ahead of the other teams, but he admitted that the Dust Bowl Diner had more members on its team than the other wagons did.

“The students turned out thick today,” he said. “We had plenty of help.”

The Dust Bowl Diner team was able to compete as an individual entity this year because Mitchell’s family donated a chuck wagon to use during the event.

Rep. Don Armes — Snake Creek Cattle Co. Wagon Boss and Cameron Alumnus of 1984 — said he was pleased to return to the competition this year and was excited to have the addition of judges.

Besides the competition aspect of the event, Rep. Armes said he liked the cook-off because it allowed for the students, as well as all the citizens that attended the event, to experience a part of cowboy history in a way that made it come to life.

“You may have seen a chuck wagon, but a lot of people have never actually put their hands on one and worked with it,” he said. “These kids are learning how to cook cowboy style, which is neat.”

The event ended with Albert Johnson, Jr., the vice president of University Advancement, awarding two plaques: the first was given to the Dust Bowl Diner for winning the judge’s blind taste test and the second was awarded to the Snake Creek Cattle Co. who was voted the crowd favorite.