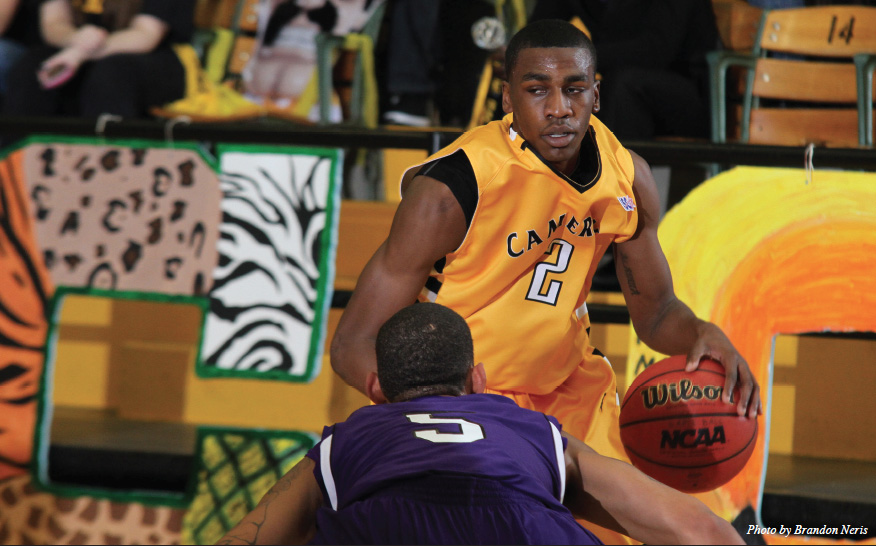 In the first game, the Aggies were able to hold off the Wildcats for their 12th straight home win, 67-62.

The first half started off with a quick-scoring possession for the Ags as they went on a run to the 17:03 mark, where junior guard Kimric Dixon hit a long ball to put the Aggies up 7-2 over. ACU made a quick turn around going on a 9-0 run and held the Aggies defensively until the play clock hit 12:08. Junior guard Craig Foster then came up big for the Aggies with a jumper to close the gap.

The teams traded buckets until 4:22 remained in the first half and Foster hit another inside jumper to pull the Aggies back ahead 22-19. Thirty-six seconds later Dixon drove back down court to slam one home for the Aggies and get the momentum shifted in their favor. The Aggies finished the half with a score of 32-23 after a senior guard Devon Crabtree drained a three.

Overall it took the Aggies coming together late in the second half to have a fighting chance for the win.

The Aggies closed down the second half leading by five, until the last 50 seconds of regulation play. The Wildcats forced a five second violation to get the ball and hit a layup down court. The Wildcats then came back and shot a three to send the game into the third overtime the Aggies have seen this season.

All the Aggies needed were an extra five minutes to seal the deal for the night. Pulling out the win by a score of 67-62, the Aggies won their twelfth home game.

The overtime period started off with the Aggies taking control of the ball and going on a 7-0 run before the Wildcats scored. From then on the Aggies maintained the lead and pushed the ball down the court to finish the game with a solid five point lead. Despite some struggles throughout the second half the Aggies finished the game hitting 43.6 percent from the field, 28 percent from downtown and 54.5 percent from the charity stripe.

Head Coach Wade Alexander explained this was a big win for the Aggies and his team is coming up with new ways to win games.

“Every win is great, and we are just finding ways to win them right now,” Coach Alexander said. “We had a great crowd for homecoming and that really spurred our guys on.”

The Aggies kept up the work at home when they recorded lucky number 13 at home into the scorebooks, beating Tarleton State University by a score of 53-51 on a late shot with 8.8 seconds left in regulation.

The Aggies made a quick comeback in the first half against the Texans, pulling ahead 13-6 at the 13:24 mark. Running close to the 12 minute mark the Texans pulled close after sinking six straight points to bring the score 13-12, Aggies. The teams did not score again for over a solid three minutes until Dixon hit his first three of the night to bring the Aggies lead to 16-12. The Ags hit one more shot before the Texans took off with a late first half run, heading into the locker room up by a score of 21-18.

Scoring percentages for both teams increased drastically in the second half. The Aggies came out of locker room and remained down until the clock hit 17:02 when junior guard Tim Johnson drained a three to put the Aggies ahead 25-23.

The Aggies kept the lead for almost four minutes until the Texans hit two layups and a monster dunk to bring the score to 29, all.

The game was tied at 36-36 after Johnson hit both of his foul shots following his drive into the lane off a steal. Junior guard Assad Robinson hit a big three to put the Aggies ahead, 39-36 until the Texans took the ball the opposite direction to match Robinson’s three and tie the game with 9:02 remaining in regulation.

The Ags remained down until the 6:03 mark, where Robinson hit another three from deep off the arc. The game remained at a standstill until 4:17 when Johnson was sent to the foul line. After missing his first and hitting the second, The Aggies widened the gap to 43-41.

The game clock wound down to 27 seconds when junior guard Jonathan Patino fouled Texans’ guard Chuck Guy. Guy made both shots from the line, putting the Texans ahead 51-48.

With 22 seconds remaining in regulation Johnson drove in for a layup to pull the Ags in close, 51-50, Texans. Johnson then fouled Texans guard Brian Word who missed his free throw. Foster came up with a big defensive rebound at 19 seconds and the Aggies drove back down court where Johnson had a jumper blocked with nine seconds to go.

Johnson explained how he saw the game going with nine seconds remaining as the Aggies inbounded the ball for their last possession.

“Going into the last play coach (Alexander) was panicking and I told him to calm down,” Johnson said. “We had take that one play, so I dribbled up the court, saw an opening and lost the ball and I passed it to Kimric Dixon.”

When Dixon got the ball it was all over from there with four seconds remaining on the clock the ball left his hands almost as soon as it touched them and in an instant the swish of an Aggie win graced the gym. Dixon explained how it felt knowing the three was good as soon as he released the ball. “I knew it was in,” Dixon said. “I was telling myself even before the game that if it came down to the last second and it was me, I was going to knock it down and win the game.”

Coach Alexander said he felt this game was going to be one the Aggies needed.

“Going into this game I knew it was going to be a tough one for both teams and they were going to have to battle it out,” Coach Alexander said. “We really needed the win and that is not just for only conference games for a possible regional tournament birth.”

Coach Alexander explained what he was thinking the team needed to do with 8.8 seconds left in the game.

“We set a high ball screen and needed a chance to make a play basically,” Coach Alexander said. “We really needed a chance to kick it out or go to the basket and the main thing we needed was an open look for a jump shot because at the end of the game they are not usually going to call a foul and if you try to force something you are usually going to finish out the game with a no call and we did not want to do that.”

The Aggies look to finish perfect at home 7:30 p.m. on Feb. 28 at Aggie Gymnasium. CU will host Northwood for men’s basketball senior night.

Additional information for basketball and other Cameron athletics can be found at www.cameronaggies. com.