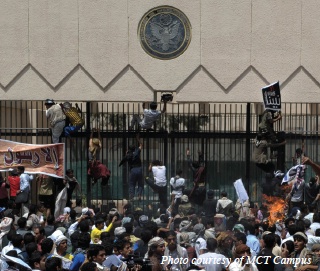 In addition to brandishing signs emblazoned with obscenities at funerals and state capitols, some of the most popular forms of protest this year have included making viral videos, scheduling appreciation days and boycotts for fast-food restaurants via Facebook, spewing vitriolic comments and furiously sharing political pictures online.

The increasing use of these tactics could be a sign of the times and an ever-shifting paradigm, but such social media strategies do not translate online interest into honest, on-the-ground activism without fail.

Invisible Children, a San Diego-based charity, released a 30-minute video in March that called for the arrest of Ugandan cult and militia leader Joseph Kony and petitioned viewers to plaster his name over buildings and other social media walls in efforts to “make him famous.”

The film also called for world-wide canvassing campaign that would culminate with an over-night event scheduled for April 20 that was called “Cover the Night.”

Worldwide turnout disappointed initial expectations, and the contents of the attractively-packaged activist kits—posters, stickers, buttons and t-shirts—have not been nearly as ubiquitous as they were designed to be, and nothing seemed to happen.

Southern-fried chicken sandwiches became a symbol for protest against same-sex marriage months later from July to August after Dan Cathy, the CEO of Chick-fil-A, said he was “guilty as charged” for his opposition toward same-sex marriage and support for organizations that endorse so-called traditional family values.

Mike Huckabee, the former Governor of Arkansas, invited his fans to a “Chick fil-A Appreciation Day” set to take place Aug. 1 at Chick-fil-A restaurants across nation, and said there was “no need for anyone to be angry or engage in a verbal battle.”

Countless Lawton citizens clamored to the Chick-fil-A located on Cache, and while the line of customers waiting to order chicken nuggets and waffle fries obstructed traffic on this already busy city street, their endeavors did nothing more than raise revenue for the franchise and further ostracize my friends who belong to the LGBT community.

The sum of these aforementioned incidents gave me pause, but it did not prepare me for what would later test my interpretation of free speech.

Heavily-armed attackers stormed the U.S. Consulate in Libya, killing the U.S. envoy J. Christopher Stevens and three other Americans, and breached the U.S. Embassy in Egypt. This attack took place amid angry protests on the anniversary of the Sept. 11 after a 14-minute clip was translated into Arabic and posted on YouTube.

The crude, low-quality clip that cost a reported $5 million to produce supposedly serves as a trailer for a full-length film entitled “The Innocence of Muslims.” The trailer first surfaced when user “Sam Bacille” posted the clip online in July. The clip mocks the Muslim Prophet Muhammad by portraying him as bloodthirsty thug who espouses polygamy and pedophilia and shreds the authenticity of the Qu’ran as a sacred text through a series of shoddy voiceovers and garish green-screen sequences.

Co-Producer Steve Klein makes no attempt whatsoever to hide his disgusting agenda in an interview with The New York Times.

“We have reached the people that we want to reach,” Klein said, “and I’m sure that out of the emotion that comes out of this, a small fraction of those people will come to understand just how violent Muhammad was, and also for the people who didn’t know that much about Islam.”

His abhorrent purpose leaves me no choice but to immediately classify the clip as hate speech.

I have been delving into the complicated minutia that comprises free speech and defamation while studying mass media law, and have emerged after hours examining case summaries and listening more confused than before.

We can distinguish speech that is offensive from speech that is blatantly tailored to put lives and property in jeopardy, but the issue at hand is one for international courts to judge. I cherish my right to voice my opinion freely as an aspiring journalist, but I cannot help but hope the filmmaker and the armed extremists are both brought to justice.

Witnessing the crisis in the Middle East has alleviated my confusion by showing me how compassion should resonate louder than the need to express our opinions and attack our enemies.

Protests taken to such brazen and deadly boundaries do nothing to ameliorate or reform the situations that instead require rational thinking and positive action.

They accomplish nothing except to aggravate the furor that consumes states, political parties, the nation and the world as a whole. Nothing can justify the loss of life left in the wake of the attacks in Libya and Egypt.

Social media campaigns make indulging and gratifying the need to be involved in politics easy, but they can reduce online efforts to little more than the popular, passing phases and inject hateful messages in otherwise harmless media.