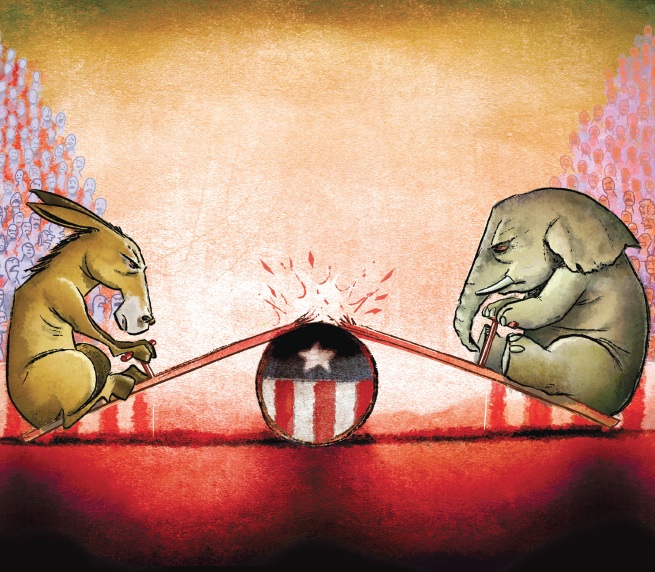 Having lived in the United States for the last three years of my life, I feel passionate about the political system of this country that I have come to call home. Even as a non-American, I have seen and heard my fair share of political banter.

For the past few months, my television has been saturated with ads and shows discussing the upcoming presidential elections, and like a lot of people, I am tired of them all.

Many people ask: “What makes a good candidate?”

I say his or her policies and beliefs, not race, or religion or lack thereof. To me, personal attacks should not have to be used to know a good candidate. The campaign should be done through facts, figures and clear and concise explanations of policies.

Both of the top running candidates and their parties have been given an opportunity to present their cases. From both the DNC and the RNC conventions, it appears the Republicans did not effectively use this opportunity.

A peanut throwing episode by members of the GOP, Paul Ryan’s stating of inaccurate facts and Clint Eastwood’s man-to-chair conversation marred an event that had all the makings of a successful convention.

The DNC’s use of Russian Ships was however overshadowed by excellent speeches by San Antonio mayor, Julian Castro, First Lady Michelle Obama and former US President, Bill Clinton.

The GOP’s presidential candidate Mitt Romney is an excellent businessman. I have no doubt that he will help boost the United States’ economy. My fear, though, is his foreign policy knowledge.

On a trip to London during the Summer Olympics, Romney had negative remarks on the city’s readiness to host the games forcing the United Kingdom’s Prime Minister James Cameron to fire back a defensive response.

Politicians know not to insult leaders or countries that host them – that’s the first rule of foreign affairs. Romney obviously did not know that.

In the event of an anti-Islamic movie which resulted in a lot of violent protests in Muslim countries and the death of the US ambassador to Libya, Romney’s hasty reply of accusing the administration of being too apologetic goes a long way in showing his lack of foreign policy knowledge.

His latest public relations issue where a hidden camera captured him calling 47 percent of Americans who depend on the government “victims,” saying his job is not to worry about them and convince them to take personal responsibility for their lives confirms my belief that he is out of touch with ordinary people.

Although I feel that the Obama administration is making a difference, I agree that he has not done a perfect job in the almost four years he has held power.

Obama’s vow to shut down Guantanamo Bay detention camp in 2008 has not been fulfilled and his plans for immigration reform has not been implemented. The increase in the National debt has also marred the Obama administration.

No one can agree totally with a political party. Democrats do not agree with all of the party’s policies neither do the Republicans. It is usually a give and take.

This is where compromise comes in. You take some, and you leave some. Elections should never degenerate to that point where “All is fair in love and war.”

In this election season, I encourage you not to vote according to party lines. Rather, I ask that you carefully analyze the strengths and weaknesses of each candidate, their policies and your beliefs and vote for the person that you are convinced will bring the most progress to the United States of America. God Bless America.