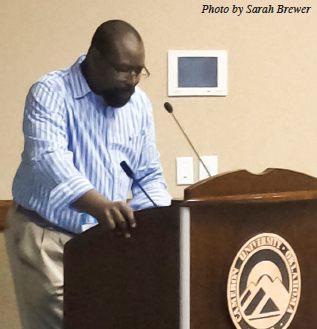 For ears and minds: Visiting writer Randall Kenan reads from his brand new story, “When We All Get to Heaven.” He has received several awards for his works.

English Honor Society Sigma Tau Delta and the Department of English and Foreign Languages hosted author Randal Kenan for the inaugural reading of the 2012- 2013 Visiting Writer Series on the evening of Sept. 14 at the CETES conference center.

Kenan has written six books, including “The Fire This Time,” “Walking on Water: Black American Lives at the Turn of the Twenty- First Century,” “A Time Not Here: The Mississippi Delta,” “Let the Dead Bury Their Dead,” and “A Visitation of Spirits.” He is the recipient of a Guggenheim Fellowship, a Whiting Writers Award, the Sherwood Anderson Award, the John Dos Passos Prize, and was the 1997 Rome Prize winner from the American Academy of Arts and Letters. He was awarded the North Carolina Award for Literature in 2005 and was elected to the Fellowship of Southern Writers in 2007.

Kenan is currently writing a novel set in North Carolina and New York City entitled “There’s a Man Going Round Taking Names,” and a collection of short stories, “If I had Two Wings.” In addition to writing, Kenan is an Associate Professor of English and Comparative Literature at UNC-Chapel Hill.

Introducing Kenan was friend and colleague Professor Hardy Jones. Jones and Kenan met in 1989 while the former was an MFA student. According to Dr. Jones, Kenan offered insight that further exposed him to literature and writing.

Kenan then proceeded to read “When We All Get to Heaven,” a yet-unpublished short story he had finished writing over the summer. In the story, the main character travels to New York City and wanders through the bustling metropolis and meets English rocker Billy Idol.

The title refers to an old hymn, but Kendall said that the idea for the story arrived a long time ago from his love for pop culture.

“I actually like Billy Idol, but there is something kind ridiculous about him. When he released a comeback album after his heyday, I saw some interviews with him, and there was something about him that was so sad and poignant that struck me. I started imagining him encountering a character that I write about it and wondered if they would have things in common,” Kenan said. “A lot of my fiction comes from slamming unlikely factors together and seeing what happens.”

“When We All Get to Heaven” contained certain qualities reminiscent of a performance, as if it were written with eyes and ears in mind. Kenan alternated between voices and sang snippets of songs while employing cadence and alliteration throughout his reading.

The audience focused on these musical attributes during a brief question and answer session. Kenan said different narration styles influenced the sound of his writing.

“I love free and direct narration, and that was a technique that Faulkner and Woolf and all of those cats used like breathing,” Kennan said. “It just seems so natural to me — narration colored by the main character’s voice and thoughts — and it just feels very much like the works that I grew up on.”

Kenan said gospel music and the language of the Bible affected his writing style, as well as other favorite authors that would haunt his work in startling ways years later.

“I realized after a reading a review how Edgar Allen Poe had his fingertips all over the place,” he said. “I had completely forgotten how obsessed I used to be about Poe.”

Kenan continued to say that aspiring writers needed to write many bad sentences before they can write good ones. He then affirmed his own advice, sharing how he developed as an author.

“I was originally interested in science fiction and was writing really bad novels in high school,” Kenan said. “I think the more you do it, the less fear you have about experimenting and making mistakes and confronting the page. The more you fill up pages with words, the more confidence you get and the less intimidating it is. A lot of what you do as a writer is psychological.” 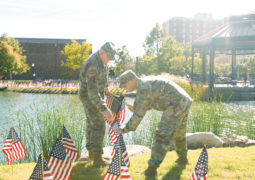 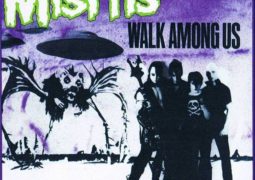 A Week in Album Reviews: ‘Walk Among Us’ by Misfits 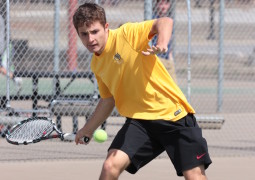