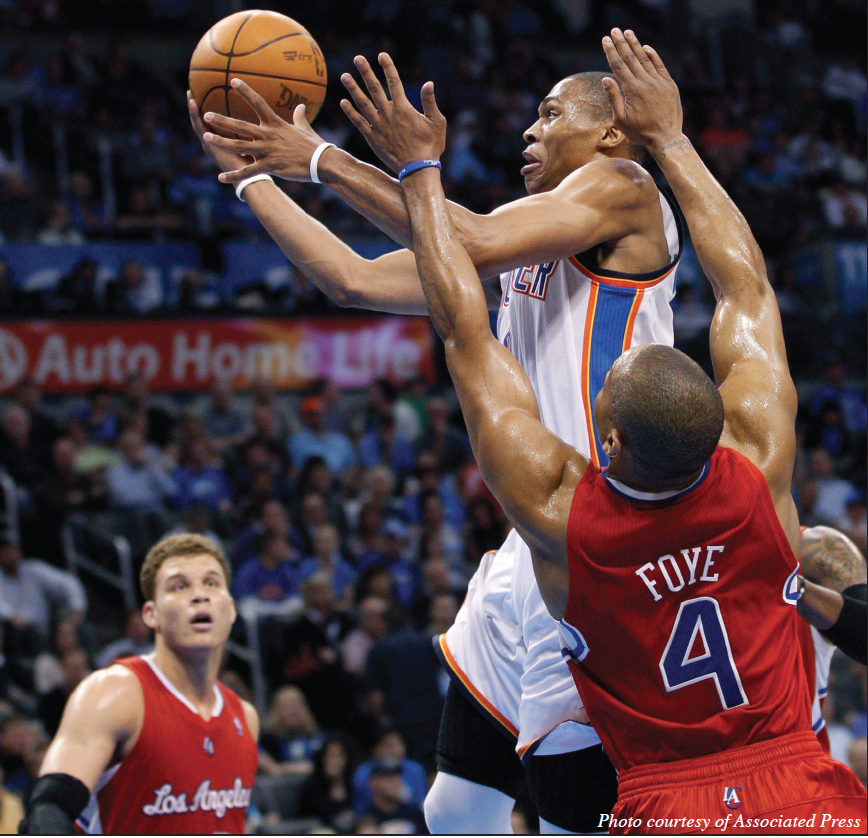 After dropping three consecutive games for the first time this season, the Oklahoma City Thunder bounced back with two straight wins before falling 100-98 at home against the Los Angeles Clippers on April 11 at home.

OKC snapped their three-game skid against the Toronto Raptors April 8 at the Chesapeake Energy Arena in Oklahoma City.

The Thunder led almost the entire game, taking an early lead in the first quarter and never trailing from that point forward. They pulled away in the third quarter by going on a 24-0 run to wrap up the 91-75 victory.

Kevin Durant, who led the team in scoring with 23 points, said that tough defense was the key to getting it going on the offensive side.

“Guys got into the lane, got to the free throw line and made great passes and our defense was really good,” Durant said. “Our defense always ignites our offense. We got stops and we turned them into points.”

Next up for the Thunder was a road trip to Milwaukee to face the Bucks who are looking for the eighth playoff seed in the East.

OKC scored often and early as they jumped out to a 35-18 lead in the first quarter behind Russell Westbrook’s 10 points.

The rest of the first half was dominated by Oklahoma City as the teams went into the locker room with the Thunder leading 52-35.

The second half took a turn, as the Bucks seemed frustrated by their inability to close the gap. Milwaukee was charged with five technical fouls in the half and could never find a rhythm to get back in the game. The Thunder won by 20 points with a final score of 109-89.

Russell Westbrook led the Thunder with 26 points, 7 rebounds and 3 assists.

Thunder Head Coach Scott Brooks said that his defense was the key to pulling out a win on the road.

“You don’t expect to go on Milwaukee’s floor and win by 20, but I thought our defensive mind-set was outstanding from the start,” Brooks said.

After winning two straight against opponents with losing records, the Thunder faced the LA Clippers who currently sit fourth in the West.

The Thunder were able to take an early six point lead after Durant made a driving layup but the Clippers did not go away. The two teams traded baskets and the first quarter ended with the Thunder up 24-21.

The score remained tight in the second quarter until veteran point guard Derek Fisher hit two three-pointers to put the Thunder up by 11 points with 7:20 left in the half. As the teams left the court for halftime, the Thunder led 55- 48.

At the start of the second half the Thunder were able to maintain their lead as Westbrook drained a three with just under nine minutes remaining. Again the Clippers clawed their way back behind free throws and a Blake Griffin dunk over Thunder forward Serge Ibaka. Heading into the fourth quarter the Thunder found their lead down to four points, 80-76.

That lead disappeared in the fourth quarter when Clippers guard Randy Foye hit a three-point shot with 8:34 left to give LA their first lead since the first quarter.

The Thunder responded with a layup by Durant followed by a three from James Harden.

The teams continued to trade baskets and with 32 second left in the game Kevin Durant hit a three to tie the game up at 98-98.

After taking a timeout, the Clippers came out and held the ball for the entire 24-second shot clock until all-star point guard Chris Paul drove to the basket for a layup with eight seconds on the clock.

Oklahoma City had one last opportunity for the win as Kevin Durant rose up for a three over Deandre Jordan but the ball found the back of the rim and the Thunder came up two points short, 100-98.

The loss marked only the sixth time all season the Thunder have come up short at home.

After the game, James Harden said the Thunder did a poor job defending Chris Paul, who scored 24 of his 31 points in the second half.

“We just got lazy in the second half,” said Thunder guard James Harden, who had 17 points off the bench. “We didn’t come out with that aggression like we did in the first half to really control him, and he took advantage of it.”