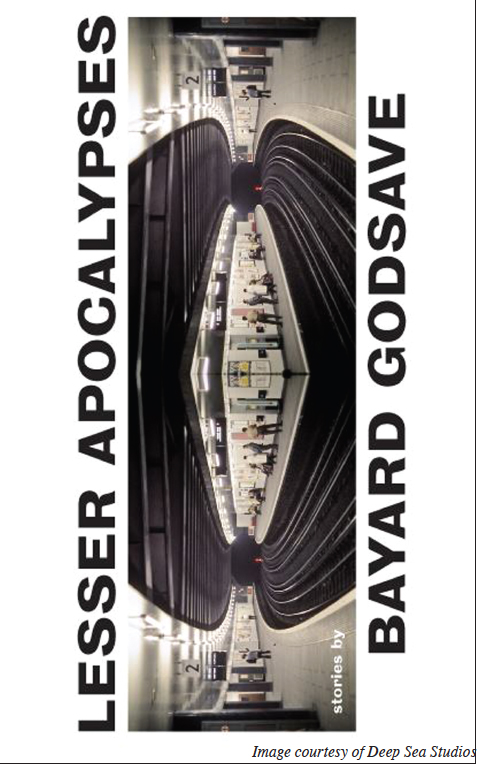 Of the many things that could provide inspiration for an artistic work, it was the Cold War’s social climate and a fiction contest that formed the roots from which the stories in Dr. Godsave’s “Lesser Apocalypse” drew life.

Dr. Godsave said that he had written many things while working on the stories in the collection; he went on to explain that the theme was not intentional, but rather something he noticed after the fact.

“I was not necessarily thinking of them as a collection as I was writing them; I wrote a bunch of other stories during that time period that are not in this collection,” he said. “I happened to notice that all of these stories seemed mildly apocalyptic.”

The Cold War and the movies of that period affected Dr. Godsave as a child, and like many authors of that era, these fears are reflected in his written art.

“I grew up with Reagan and Gorbachev on the cover of Time Magazine every week,” Dr. Godsave said. “I remember being about 9 or 10 years old and people were talking about how Nostradamus predicted these things, the end of the world, and all the while I am watching movies like Red Dawn and The Day After, and as a kid it really freaked me out. I did not have the faculties to understand that the rhetoric between Reagan and the Soviet Union was just that; I took things so literally, like this is going to happen and there is no stopping it.”

The stories finally came together in the collective form when Dr. Godsave entered a fiction contest, and that was when the theme revealed itself.

“About a year and a half ago, there was a writing contest for fiction manuscripts that were a hundred pages or less, and that was what prompted me to make this particular collection,” Dr. Godsave said. “There was this theme running through these stories and it made sense to put them together as a collection.”

Dr. Godsave said that the collection placed in the competition and was soon picked up for publication.

Dr. Godsave said that the stories are not all about the end of the world, and that sometimes the apocalypse in the story is more about the individual experience of certain characters.

“There is one story that is post-nuclear war France,” Dr. Godsave said. “Another is about a kid who is so freaked out by what he is seeing on the news that he wants a gas mask for his birthday and at the same time it is a center piece around his parent’s divorce so it is more of a personal apocalypse.”

Some of the stories, he went on to explain, were reflections of his childhood emotions working themselves out.

“The story about the kid who wants the gas mask has a lot of my own childhood fears in that,” Dr. Godsave said. “It was not necessarily a reflection of my parent’s marriage as it was a reflection of what was going on inside of me.”

Dr. Godsave said that besides the lengthier stories, the collection also contains some shorter vignettes.

“The collection contains five stories and four vignettes,” Dr. Godsave said. “The vignettes range from three to five pages and the stories are a bit longer. It is a compact collection.”

The vignettes, Dr. Godsave said, are interlaced with the stories. He also introduced two characters from the vignettes and their relationship to both each other and the collection.

“The vignettes between each of the stories takes place in this weird, post-apocalyptic landscape where these two guys just want to kill each other, and we really do not know why,” Dr. Godsave said.