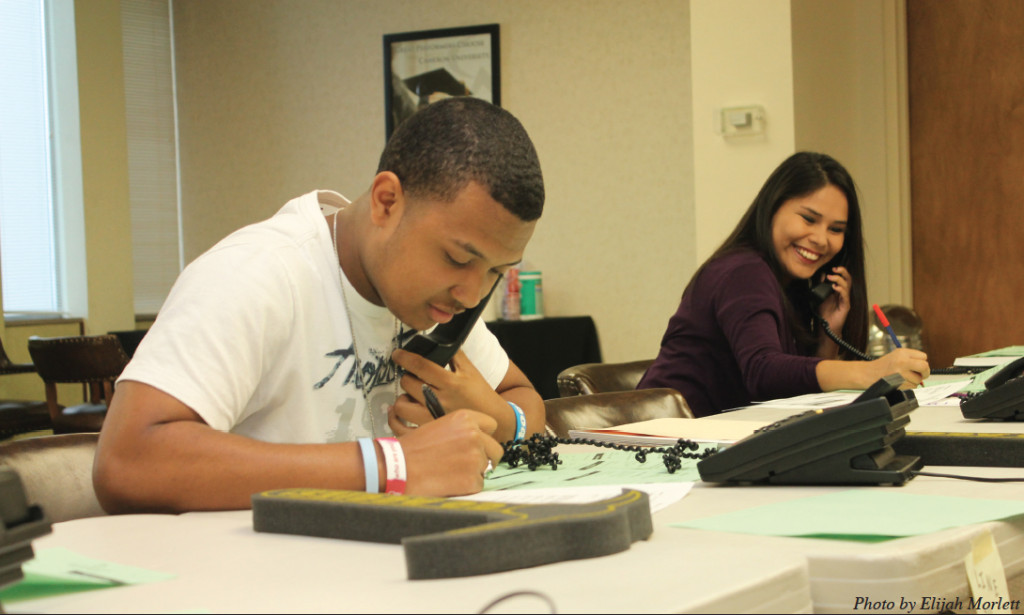 Cameron University’s annual Phonathon started up this semester on Feb. 27 and will last until April 5. The Phonathon began in the spring 2010 semester and has been held every fall and spring term since its inception.

According to Athena Jarvis, Director of Development and University Advancement, the Phonathon uses student workers to call CU alumni for donations that go toward the school, with alumni having the chance to choose where the money donated goes to.

According to Jarvis, the Phonathon also works as a way to connect current students and CU alumni.

“CU’s Phonathon is a great giving opportunity to promote an affinity between the alumni and the Alma mater,” Jarvis said. “By having current CU students calling, it’s a great way to start an open line of communication to our Alumni. Who better to call an alumnus than someone that has walked the same halls, sat in the same classrooms and may even have had an instructor in common?”

In addition to connecting students from CU’s past and present, it also manages to keep alumni who are not in the immediate Lawton area updated on the status of the school.

“A lot of our alumni do not live in the Lawton area, and our students are able to receive updates on them as well as updating them on what’s happening at CU,” Jarvis said. “We like to let them know about Plan 2013.”

The recruitment for this year’s Phonathon found students through advertisements and public appearances, Jarvis explained.

“We begin by recruiting and hiring great student callers, as they are the key to a successful Phonathon,” Jarvis said. “This year we put an advertisement out on the web page asking for student workers. We also put up a table at the MCC to recruit students. This, however, isn’t a work study program.”

According to Jarvis, the students who worked for the Phonathon this year also had to go through training in order to work the job and to know the routine in which the phone calls were to be made.

“We go through our alumni database and make pledge forms that have the individual’s name, contact information and when they graduated, with what degree, that way the callers know who they’re calling,” Jarvis said. “We always start by confirming or updating the alumni’s address, phone and email to ensure that they are receiving information about current events at CU.”

The Office of Development, in charge of the event, has a goal this semester for the Phonathon to reach.