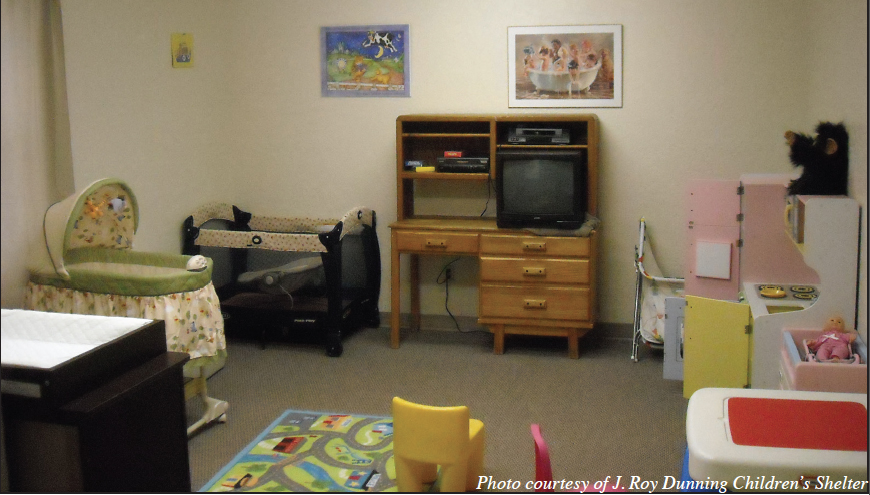 The J. Roy Dunning Children’s Shelter ( JRDCS) is not a familiar place to some in the Lawton community. Some do not realize that JRDCS is an emergency shelter for abused, abandoned and neglected children.

According to Executive Director Chearlene Glover- Johnson, Ph.D., the JRDCS is a non-profit 501c3 organization that receives funding support from the United Way, grants and donations from the Lawton community as well as through fund raising events such as the upcoming Ninth Annual Golf Tournament on June 15 at Fort Sill.

The shelter’s mission is to provide temporary emergency shelter and emergency foster care to abused, abandoned or neglected children between the ages of newborn and 12 years in a safe and nurturing home environment.

Dr. Glover-Johnson explained that the JRDCS was established in Lawton in 1962, when a donation from J. Roy Dunning — combined with donations from The Lawton Women’s Forum, the Kiwanis Club, the Lawton Lions Club and the community — funded the building of the new children’s shelter.

Live-in caregivers, known as “house parents,” operated the shelter from 1962 until 1989 when a professional staff was hired. According to Dr. Glover- Johnson, the staff is on-duty 24 hours a day, with three rotating shifts to monitor the children in the shelter and to receive new incoming children.

Dr. Glover-Johnson said the JRDCS is the only emergency shelter in the state of Oklahoma that caters to children who are between the ages of newborn and 5 years. For 50 years the JRDCS has provided its services 365 days a year, based on the belief that all children should be protected from traumatic and unstable circumstances beyond their control.

“I feel respectfully humbled to the fact that the children that we care for do not have a voice; they do not get a choice in what happens to them,” Dr. Glover-Johnson said. “What we do is take care of them so that in this traumatic transition, the child at least knows that when they are with us that they are safe in a nurturing warm environment.”

“The childcare workers are the unknown heroes, the children are the very unknown and sometimes forgotten victims and the shelter is the entity that brings them together and provides that protected environment that is so important,” Dr. Glover- Johnson said. “Without the JRDCS, these children would have nowhere to go.”

Dr. Glover-Johnson said that because the shelter is a protected facility, the JRDCS cannot advertise where it is located and the public cannot visit the shelter; however, the shelter accepts donations of items that are consistently used for the children’s care through the United Way office and all donations are tax deductible.

Monetary donations can be mailed to P.O. Box 2622, Lawton, OK, 73502. The United Way at 1116 SW A Ave. accepts donations of consumable or non-consumable items for the shelter.