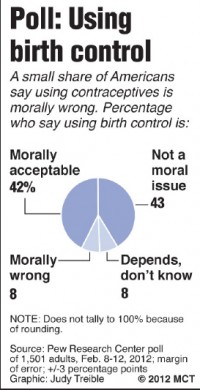 Reproductive rights have become the latest obsession of the 2012 presidential campaign, and conservative-led efforts to outlaw abortion and limit access to contraception have intensified, especially in Oklahoma.

The social issue became a point of contention during the campaign after the Obama administration added a provision to the Patient Protection and Affordable Care Act (PPACA) on Feb. 15 that requires church-affiliated employers to cover birth control costs and other preventive services in their health insurance plans.

However, some congressional Republicans claim that the policy would force Catholics and members of other religious organizations to take positions contrary to their beliefs.

When the image of an all-male panel of witnesses seated during a hearing to discuss these issues surfaced online, I was disheartened.

House Oversight and Government Reform Chairman Darrell Issa (R-Calif) denied Georgetown law student Sandra Fluke, the only female Democrat-called witness, from testifying during the hearing because, according to Issa, she was “not qualified.”

Fluke was not pleased with this dismissal.

Chairman Issa defended his decision on the basis of the hearing’s original intent.

“The hearing is not about reproductive rights and contraception, but instead about the Administration’s actions as they relate to freedom of religion and conscience,” Issa argued.

Had I been there, I would have walked out of the hearing with Reps. Carolyn Maloney (D-NY) and Eleanor Holmes Norton (D-DC) in protest, too.

To allege that this provision would not entangle both reproductive rights and religious freedom shows a failure in comprehending how sensitive this issue has become as of late.

Here in Oklahoma, the state where I have made my home for seven years, personal visions of morality may soon be enforced through legislation.

The Oklahoma Senate voted 34-8 on Feb 16 in favor of HB 1433, known also as the Personhood Act. The measure cites conception as the beginning of human life.

“The unborn child at every stage of development (has) all the rights, privileges, and immunities available to other persons, citizens, and residents of this state,”

If passed, this bill would not only criminalize abortion, but also infertility treatments in which embryos are destroyed. In extreme cases, it could hold women liable for miscarriage.

Suppose the circumstances surrounding the conception were less than desirable. State Senator Constance Johnson submitted an amendment on Feb. 25 to protect victims of rape who were impregnated as a result of forced intercourse.

“In the spirit of shared responsibility in issues of reproduction, if a woman declares that she is pregnant non-consensually, the sperm donor shall be required to undergo a statutorily mandated vasectomy, shall be fined Twenty-five Thousand Dollars ($25,000.00), and shall also be financially responsible for the offspring of such pregnancy until the age of twenty-one,” the amendment states.

This provision, both serious and satirical, creates an exception for rape victims. The amendment also means to show that, while men and women both participate when creating a human life, women would be held for responsible for the livelihood for their fetus and may be considered less than citizens under this law.

Lawmakers in other states, including Missouri and Virginia, have introduced similar laws, but Oklahoma is closest to passing such a Personhood Act.

A “Stop the Oklahoma Personhood Act” rally and march was slated for Feb. 28 in Oklahoma City to protest the Personhood Act before the bill goes to the Hose of Representatives. Organizers asked protestors to wear aprons and old shoes to represent the “barefoot and pregnant” ideal.

I was tempted to attend, but I reluctantly declined, as I had midterm exams scheduled for that day. I will say this, though: If this anti-women movement continues, I will pack my bags and move to another state in which women are invited to discuss legislation that impacts women directly.