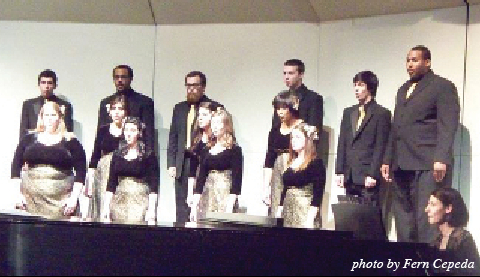 A night filled with music took place on Feb. 23 in Cameron University’s Theatre. Cameron University’s Concert Choir and Centennial Singers came together to deliver a performance for everyone to enjoy, with united voices singing with a piano accompanist, along with bass, drums and guitars all helping to bring the music to life.

The night started off with the Concert Choir. Conductor Dr. Earl Logan, and Yiuka Chan, pianist began with a set called “Gloria.” Gloria has six songs and delivered nicely through the different voices on stage. The voices all fit together to provide the audience a musical experience. The audience was also treated to a specific voice; one that rang out in a solo performance.

Anjelika Ramsdell, a senior Vocal Performance major, is a soprano and had a solo in a number of songs. She finds the performance experience exhilarating.

“I love performing in front of an audience, it is so thrilling,” she said. “Getting the reaction from the crowd really makes me feel great, and reassures me that I’m doing something right.”

Ramsdell was also grateful for her professor’s teachings, as they enabled her to make full use of her voice.

“I usually don’t have to worry about saving my voice because I have learned how far I can push it,” she said. “I’m pretty good at knowing what my voice can do and for how long. I have the great professors at Cameron to thank for that.”

The songs that the choir delivered were soft and well received. Audience members were tapping their feet to the rhythm of the music, enjoying the performance. Once the choir finished their performance, they took a bow and let the audience overwhelm them with applause. Dr. Logan took a bow as well, and accepted the audience’s approval.

Once the choir got off the stage it was the sound of Quinton Williams’ marimba that took over the stage. Williams performed a solo piece so delicate the sounds echoed through the room. After the marimba solo, the Centennial Singers took over the evening.

While all of the songs cradled audience ears, it was the Singer’s last song that got the most attention. The last song, “I’ve Got the Music in Me,” was fast paced and had a lot of beat to it, in addition to the Centennial Singer’s dance moves.

Once the song was over, the audience gave a roaring applause. Then the accolades died down, the Singers gave the audience an encore performance of the song’s ending. Smiles of joy came from that stage as the show ended.

The evening’s concert was well-received, and audiences were able to experience a night of music they might not have been able to hear ordinarily.