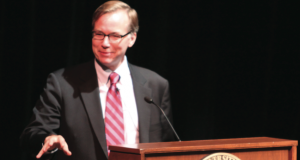 The 2011-2012 Cameron University Academic Festival, “Afghanistan: Its Complexities and Relevance,” continued the spirit of learning achieved through Dr. Khaled Hosseini’s event by presenting journalist and author Steve Coll on Sept. 29.

Steve Coll has won two Pulitzer Prizes and authored “Ghost Wars: The Secret History of the CIA, Afghanistan, and Bin Laden, from the Soviet Invasion to September 10, 2011” and “The Bin Ladens: An Arabian Family in the American Century.” He also worked as the Managing Editor of the Washington Post and is currently president of the New America Foundation.

Approximately 30 years of war have plagued the country of Afghanistan following a tumultuous history with various internal revolts. The media coverage of these events combined with the perception of Afghanistan drawn from the acts surrounding Sept. 11, and the war that followed, has led to the circulation of various myths.

A significant portion of Coll’s presentation was regarding three myths that he believes to be both common and unfounded regarding Afghanistan today.

The first myth that Coll addressed is the idea that there is no Afghanistan and that it is just composed of various warring tribes. Coll argued that a halcyon Afghanistan existed in previous years before the invasion of the Soviet Union.

“History makes it absolutely plain that there is an Afghanistan nation,” Coll said. “It existed in peace with itself and its neighbors for almost a century from 1920 to 1975.”

According to Coll, in previous years, scientific discovery and a rare culture marked an Afghanistan that many Afghans still remember today. He said that Afghanistan traditionally held a great sense of nationalism with the people having an irrefutable feeling of pride and belonging in their country.

The second myth that Coll wished to dispel was the rumor that Afghans are perpetually at war.

“For much of the 20th century, they simply were not. Now there are local conflicts continually in Afghanistan,” Coll said.

He said that the role of war and violence in Afghanistan has not been about conquest, but rather a tool with which to negotiate and to balance society. Coll said it might appear that the Afghans are constantly fighting; the local conflict is not aggressive in nature but rather a form of collective bargaining.

The third myth that Coll spoke about was the popular notion that Afghans hate foreigners due to their resistance against the British and the Soviet Union and the fear that they will show the same opposition to Americans.

“It is true that there is a streak of strong nationalism within Afghanistan. It is sort of the opposite of ‘There is no Afghanistan,’” he said. “There is an Afghanistan that is so nationalistic that it is skeptical about international armies coming into its space who do not have its best interests at heart.”

He said it was true that the Afghan nation has a history of uprising against unwelcome armies or unjust rulers.

“That history, I would argue, should not control our thinking about our positive ideas for success or failure,” he said. “That is actually not what is going on in Afghanistan right now.”

According to Coll, American public opinion of the country seems to be against the idea of the chance of a peaceful Afghanistan. However, he said that even though both sides have made errors throughout the 10 years of war in the country, there are not many citizen uprisings in the street toward the American presence or many of the Afghan army switching sides to join the Taliban.

Coll expressed concerns on whether an idyllic society in Afghanistan was possible at this time. He said that over 75 percent of the country’s citizens are under the age of 25. The citizenry is composed of people who want their country back, have seen nothing but war, and may possibly be willing and capable of changing that especially with their increased knowledge of technology.

Coll said that the country is preparing for civil war, which is a possibility if the U.S. pulls out too quickly. He explained that the people of Afghanistan do not want the local conflicts that have been so much apart of its history, but are preparing for it in case it should happen.

“We cannot assume that the past will govern the future anywhere in the world anymore especially in these countries dominated by young people who are wired together by technology,” he said. “In Afghanistan, the strength of the younger generation that is coming up poses both a risk and an opportunity. Afghans have a living memory, a desperate memory that leads them to seek restoration of their country.”

Although Coll expressed concerns about the U.S. pulling out too quickly, he also said that it is difficult for us to stay there as well due to the price that Americans have already paid and the financial burden that it has created on the nation’s budget and that a lengthy continued presence there would have to be justified.

Coll’s observations come from personal time there in his days as a war correspondent for “The Washington Post,” personal research and visits he has made to Afghanistan.

Coll’s presentation was the second of five lectures by international speakers about the history, issues and future of Afghanistan.