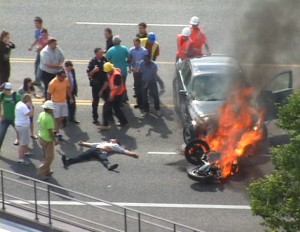 SALT LAKE CITY, Utah (AP) — The students knew they had to act quickly when they disregarded the dangers of approaching a smoking car and rushed to help lift it so a man — trapped beneath with a motorcycle just feet away in flames — could be freed.

Abbass Sharif remembers only that something needed to be done as he, a fellow Utah State University doctoral candidate and more than half dozen others lined up on one side of the 4,000-pound car. They were able to lift it within moments, allowing one of the rescuers to pull Brandon Wright to safety.

“The chance of him dying if we don’t do it is like 100 percent,” the 28-year-old Sharif said, recalling the sequence of events that played out Monday in Logan, a college town roughly 90 miles north of Salt Lake City. “If you weigh the chance of you being in danger, that’s going to be low, like 20 percent, compared to 100 percent.”

After the heroic act, Assistant Logan Police Chief Jeff Curtis said one could “only speculate what the outcome would have been” had none of the rescuers sprung to action.

For their bravery, the rescuers are being called “heroes” and “angels,” though none want the labels.

“That’s a big title,” said Sharif, a doctoral candidate from Lebanon. “I don’t consider myself a hero. It’s just our humanity … Everyone is going to help.”

Their few minutes of heroics were captured on video and have gone viral on the Internet. The man they saved — the 21-year-old Utah State University student — is grateful.

“I’m just very thankful for everyone that helped me out,” Wright told The Associated Press by telephone from his hospital bed. “They saved my life.”

At a hospital news conference on Tuesday, Wright’s uncle, Tyler Riggs, recounted what Wright told his family about the accident.

The crash happened near Utah State University, where Wright was headed to study at a computer lab, Riggs said. The BMW was pulling out of a parking lot.

Tire and skid marks on the highway showed that Wright laid the bike down and slid along the road before colliding with the car, Curtis said.

Riggs said Wright tried to protect himself by laying his bike down.

The bike hit the car’s hood and bounced to the ground, while Wright, who was not wearing helmet, slid under the car and then both vehicles burst into flames, Curtis said.

The video, shot by university staffer Chris Garff who had seen the smoke, shows a crowd gathering around the burning wreckage as flames shoot into the air.

Some of the rescuers are wearing construction helmets and safety vests, others sport school backpacks and at least one police officer is in the crowd. Some quickly place their hands on the car and start to rock it, while others lift from the bottom until the car tilts up.

Once the car is on its wheels, a construction worker in a hardhat and a lime green T-shirt can be seen dragging a spread-eagled Wright from under the car.

Two officers then move in with fire extinguisher. A few minutes pass before paramedics start to provide Wright with medical care. It’s unclear whether they had just arrived or whether they were waiting for the scene to be declared safe.

“The danger? I didn’t think about it for a minute,” said James Odei, 35, a doctoral candidate from Ghana who is studying statistics. “All I wanted to do was grab that car and raise it.”

Riggs said Wright remembered details from the crash and told his family that he felt scared and could see and feel the flames. “He remembers being under the car, spitting up blood and not being able to talk,” Riggs said.

Riggs said Wright has not seen the video of the rescue.

Despite not wearing a helmet, Riggs said, Wright had suffered no head trauma. Wright does have two broken legs, a broken pelvis, road rash, burns on his left foot and abrasions to his forehead. The hospital said Wright was in satisfactory condition.

The driver of the BMW, John Johnson, had minor injuries. Johnson, a USU business school official, did not respond to email and phone messages seeking comment.

Rescuer Matt Barney, a radiation therapist who works with cancer patients, said Johnson appeared to be in shock after the accident. “He was really worried about the safety of the young man,” Barney said at a police news conference. “He was very emotional and shaken.”

Curtis said he didn’t know whether any citations would be issued or charges filed.

Wright’s family, however, is grateful to the “angels who came to his aid,” Riggs said.

“They risked their lives doing it,” he said. “It restores your faith in humanity.”

Image: In this Monday, Sept. 12, 2011 image taken from video, a group of people are directed away from the scene by police after tilting a burning BMW up to free Brandon Wright, on his back on the ground, who was pinned underneath after he collided with the car while riding his motorcycle on U.S. 89 in Logan, Utah. Authorities said Wright was riding his motorcycle near the Utah State University campus in Logan when the 21-year-old collided with the BMW that was pulling out of a parking lot. Tire and skid marks on the highway indicate that Wright laid the bike down and slid along the road before colliding with the car, Assistant Police Chief Jeff Curtis said. (AP Photo/Chris Garff)