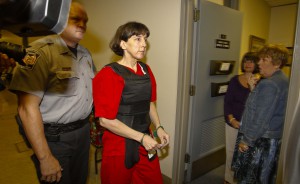 HUNTSVILLE, Ala. (AP) — Pale, thin and dressed in a red jail uniform, a Harvard University-educated biology professor pleaded not guilty by reason of insanity to capital murder charges Thursday in the slayings of three colleagues killed during a faculty meeting at the University of Alabama in Huntsville.

Amy Bishop, who was mostly silent during a hearing, looked down at a table as one of her lawyers entered the pleas on her behalf. She also pleaded not guilty by reason of sanity to attempted murder charges in the shootings of three other colleagues who were wounded but survived.

Defense lawyer Roy Miller talked briefly with Bishop after the hearing before uniformed officers led her back to jail, where the mother of four is being held without bond.

“You ok?” asked Miller, who has described the woman as paranoid in media interviews.

Bishop is accused of pulling a gun out of her purse and opening fire during a February 2010 faculty meeting, killing three professors and wounding three other colleagues. Police and people who knew Bishop have described her as being angry over the school’s refusal to grant her tenure, a decision that effectively would have ended her employment in the biology department at UAH.

After the killings, Bishop also was charged with killing her teenage brother in Massachusetts in a shooting that originally was ruled an accident in 1986.

Court officials said evidence about the Massachusetts slaying could become an issue in the Alabama trial should Bishop take the stand or if defense experts testify about her mental state and psychological history. Defense lawyers haven’t indicated whether Bishop wants to testify.

Mann ruled on several defense motions, including a defense request to seal the case from public view and keep spectators out of pretrial proceedings. While Mann initially sealed court records, he reversed himself during the hearing and said most documents would now be open to the public.

While not revealing much of the prosecution strategy, District Attorney Rob Broussard said he doesn’t plan to show jurors clothes worn by the victims, who were seated around a conference table when shots rang out. He also said his office would not attempt to use evidence about Bishop’s past “bad acts and crimes” during its main case, but could attempt to do so later if needed.

Broussard said his office has lots of physical evidence about the shootings, including many documents and photographs, and had provided everything it was required to turn over to the defense.

Miller said it appeared that prosecutors had done a good job of providing Bishop’s side with evidence, but added: “Judge, we more or less have to take their word on it.” Mann told prosecutors to be forthcoming with evidence “so that’s not an issue later on.”

Image: Accused UAH shooter Amy Bishop is led away after her plea hearing in Judge Alan Mann’s courtroom at the Madison Co. Courthouse in Huntsville, Ala Thursday Sept. 22, 2011. Bishop pleaded not guilty by reason of insanity Thursday in the shootings that killed three colleagues and wounded three others during a Feb. 2010 faculty meeting. (AP Photo/ The Huntsville Times, Glenn Baeske)