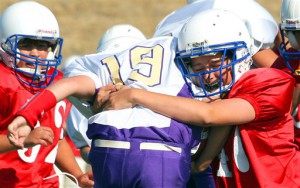 Since I was three years old, my family and community dubbed me an athlete. To some, this is just a regular phase in their lives. To others, this is what defines them.

Being an athlete is something that is much more than fame and fortune. It is the adrenaline you feel when the lights hit you for the first time at night. It is the feeling you get when the crowd is chanting your name or screaming after you make the game winning shot. However, does this still hold true to all athletes today?

In recent years, there has been much speculation that athletes get paid too much, athletes are becoming greedy with their earnings, and they have forgotten what it means to play for the love of the game.

When a child is asked what his/her favorite part of a game is, the child may have countless reasons why he/she plays that game; money is probably not going to be one of them.

As I was growing up, I wanted to play Major League Baseball so bad that I would do just about anything and learn any position to achieve that goal. However, my dreams were put on hold on March 6, 2006 when my sister and I were involved in a head-on collision.

We were rushed to the hospital after the wreck. The doctor said that I was no longer allowed to play baseball due to internal damage that my body had sustained in the accident. I remember crying for weeks simply because I loved baseball. Knowing that my MLB dreams were shattered, ripped my heart in half.

I vowed that any sport I played in place of baseball would be played for the love of the game. I started running during middle school and I never thought that I was very good until after my wreck. A high school coach told me that I would never be what I wanted to be because I played every game with too much passion.

I was confused by this statement. It became my mission to prove to that coach that I could do anything I set my mind to do. I started training as hard as I could and made sure that my body was ready for cross country season during my senior year in high school. I literally ran until my feet bled.

Regardless of the weather, I ran because I loved it and because I had something to prove to the naysayers.

I made it to the Texas state meet in the fall of 2008 where I placed eighth overall and made the second team all-state ranking.

I did it all because I loved the sport, I did it for the sense of self-pride and I did it to prove that I was a good athlete. I did not do it for the money.

Certainly many professional athletes face similar hardships; however, how many still play for the love of the game rather than the annual argument for more money?

I completely agree with this statement and I am sure that many others would as well.

A professional athlete should be a role model for kids, not someone who wants nothing more than fame and fortune. Multiple accounts of athletes being charged with crimes over the years have made many sports fans wonder why they liked a particular athlete in the first place.

How does society expect children to look up to men who set up false pretenses for the children to play under? What happens when children start playing sports only with the hopes of making big money? Why can athletes not play for the same reasons that the fans who sit in the stands hope the athletes play for? Why can professional athletes not be like my kindergarten t-ball team and play because the sport is fun and provides a good time on the field, playing for the love of the game?

Perhaps, one day professional athletes will wake up and realize that the game they play has become nothing more than a monetary object rather than the game they got hooked on during their childhood.

Maybe my ideals about professional athletes are outrageous, but maybe, just maybe there is one athlete out there who will start a movement after remembering what it is to play for the love of the game.