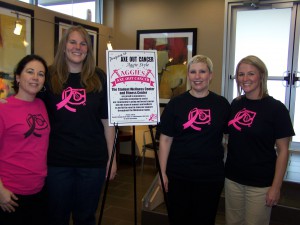 Cameron University students, faculty, staff and alumni are training hard to “Axe Out Cancer” by raising funds for the Susan G. Komen for the Cure Foundation.

According to Deanice Shegog, Director of the Student Wellness Center, Race for the Cure is a series of races specifically designed to raise money for the Susan G. Komen foundation. She said they decided to create a team and join the race as a result of President Cindy Ross’s Plan 2013.

“President Ross’s Plan 2013 is about making the campus healthier,” Shegog said. “One of the ways to do that is to pick something that has a cause. Race for the Cure has a cause and it can help people get healthy. That’s why we picked it.”

Shegog said they decided to get involved in a national cause due to the diversity of CU’s student body and community. She said that Cameron students come from all over the United States and should feel like they are making an impact in their own communities.

“We chose a national foundation because our students come from everywhere,” Shegog said. “We decided that in order to encourage them to make a difference in their own community, or to use that as a slogan, we have to give nationally.”

Fitness Coordinator Lendi Clodfelter said CU’s team would participate in several Race for the Cure events in the fall including a 5K in Tulsa, Oklahoma City, Wichita Falls, Texas and a half to full marathon in San Antonio, Texas.
According to Clodfelter, CU students, faculty, staff and alumni can join the team for $10, which includes a free T-shirt, as long as they raise about $500 before the first race.

Clodfelter noted that team members would be able to raise funds in a variety of ways including soliciting donations from members of the community and participating in-group fundraising events including T-shirt and water bottle sales.

Shegog said that the water bottles would be sold in the McMahon Centennial Complex over a span of a few days for $5.

“We agreed on $5 because Sodexo is going to give students their first drink for free, then give them discounted re-fills throughout the event,” Shegog said. “It will run into the fall semester and, if they drink a lot of tea or soft drinks, they’ll more than make back their $5.”

According to Shegog, even those who never run can join CU’s team. She explained that they have training programs to build endurance in team members so that by the time they go to the San Antonio race the first weekend in November, members should be fully able to run the half or full marathon.

“It’s a training program so if a person has never run a day in their life they could, ideally, be running the half marathon by November,” Shegog said. “The goal is to get them up to a 5K, which is a 10 to 12 week program, to a 10K and then to a half marathon.”

Along with participating in races hosted by other communities, Clodfelter explained that they would be sponsoring a 5K/10K race here in Lawton entitled “Axe Out Cancer”. She went on to say that the race would be held at 10 a.m. on June 18 at Elmer Thomas Park. She hopes that the CU and Lawton/Fort Sill community will participate.

“As part of the journey to make a difference, we have put together a sanctioned 5K/10K race to be held in June on a certified course; 100 percent of the funds raised during the race will be donated to the Foundation,” Clodfelter said. “We strongly encourage the Cameron community and Lawton community to participate in this race as we help Axe Out Cancer.”