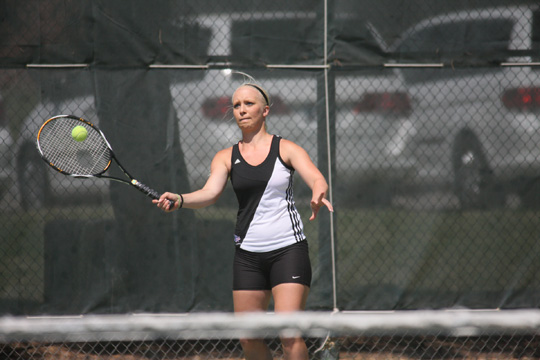 After coming off a perfect fall season, Cameron women’s tennis team is looking to reassert their dominance this spring.

The women, who finished the 2010 spring season with 17-10 record, plan to establish an even more impressive record for the 2011 season. The women begin the season ranked 17th in the nation. Regionally, the Aggies are second.

In order to have yet another successful season, the team will rely on new and returning talent.

Sophomore standout Amanda Moberg will return to the number one position. The Norrköping, Sweden native boasted a 25-3 record last spring and will starts the season ranked 27th in the nation and third in the region.

Julia Puckhaber, who plays at the number two spot, is returning this season as well. The CU sophomore is ranked 11th in the region.

As doubles partners, Moberg and Puckhaber have earned a national ranking of 14 and the duo sits second in the region. Last spring, the doubles tandem dropped only three matches. The pair intends to stay at the top of the rankings with the continuation of their stellar on-court chemistry.

Elvira Sholles is the only other returning player on the team. This will be the sophomore’s second season with CU. Sholles has proved to be a consistent and critical member of the team, winning the majority of her matches.

In addition to the team’s returning players, three newcomers have joined the women’s squad for the 2010-2011 season.

All three women helped contribute to Cameron’s outstanding fall season in which the team went undefeated.

CU tennis coach James Helvey said he is pleased with what he has been seeing from the women in practice.

“Practice is going well and everyone is hitting well. It’s still early in the season, so considering that things are looking good,” Helvey said.

According to Helvey, the team he has this season is much changed from that of last season.

“Everyone is really good,” Helvey said. “We are a different team than last year. We have good players from top to bottom.”

Though the team has a new intensity level this spring, the competition they face is sure to be fierce. Defeating Abilene Christian will certainly be one of the team’s toughest challenges.

“Abilene naturally has a first-class program, but I feel like we’re right there with them,” Helvey said.

With the changes in the team’s line-up, Helvey has a completely new set of expectations.

“I expect to win Conference and Regionals,” Helvey said.

The Aggie women opened their season on Feb. 5 in a match against Dallas Baptist in Ennis, Texas. The team won the match 5-4. After getting ahead in doubles 2-1, the Black and Gold secured the win with victories at the number one, two and six positions.

Though CU was scheduled to play two more matches earlier this month, they were cancelled due to inclement weather.

The women will next be in action on Feb. 23 when they play Oklahoma Baptist in Shawnee, Okla.

The first home match for the Aggies will be on March 1. The contest will also be the squad’s first conference match-up of the season as they will take on the Tigers of East Central University.