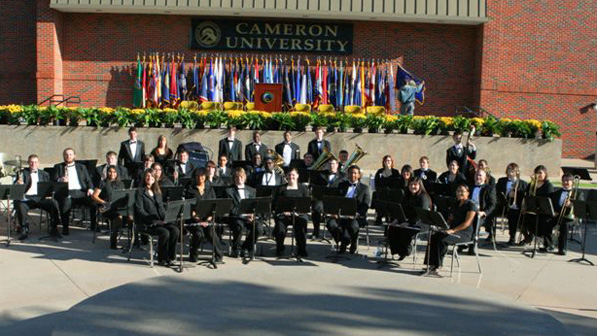 Sound the trumpets: Members of the Cameron University Concert Band come together during the fall 2009 Honors Convocation. Courtesy Photo

The Cameron University Concert Band will perform with the Eisenhower High School Band at 7:30 p.m. on March 30 in the CU Theatre.

It will be the second time a local band has been asked by the Music Department to play at their early spring concert; last year, the MacArthur High School Band accepted the department’s invitation.

Assistant Professor of Music Dr. Roy Couch will conduct the CU Concert Band during the performance and said that the collaboration effort between the university and community emphasizes the importance of the arts.

The Eisenhower Band, conducted by Joel Haas, will take the stage first, performing “Southern Star” by David Gorham, “Tournament” by Stephen Bulla and “Dancing Reeds” by S.D. Eisch. The CU Concert Band will then perform six more pieces, each chosen specifically for their practicality in wind bands or for their complexity.

“I try to mix the literature based on several factors,” Dr. Couch said. “First, the level of the band at this point. We’re a very young band, predominantly Freshmen. I cannot overwhelm them with overly-technical literature. At the same time, I want to move them forward in their development as musicians.”

The receptiveness of the audience is also a major factor in deciding what pieces to perform, Dr. Couch said.

“We want to move the musicians to a level that’s appropriate for college wind bands, but basically we just want people to come hear us,” he said. “The whole point is to perform and communicate something musically to an audience. That’s what I emphasize in rehearsals, ‘What is this music about? What are we trying to say with it?’”

The joint venture between the two bands is a recruitment opportunity for CU, Dr. Couch said, and is in addition to his promotion of Cameron throughout the southwest region of Oklahoma.

“My outreach efforts go way beyond just inviting bands,” he said. “I visit not only the local high schools; I go regional. I visit, listen to a rehearsal, and the band directors have been very receptive.”

“When I first got here two years ago, my impression was that there was a pretty good band walking around campus,” he said. “They’re just not all coming to band practice.”

Though Music majors will have more of a frontal role in classes and in performances, non-music majors are always welcome, Dr. Couch said.

“My expectations for the Music majors are for them to be leaders,” he said, “because this is their chosen field of study, but we have a fair amount of non-music majors in the band, and I welcome them.”

The collaborative effort with the Eisenhower High School Band is the first of two spring concerts for the CU Concert Band, the second taking place in late April as an integrated performance with members of the U.S. Army Band from Fort Sill.

“It’s a really good opportunity for the kids, because they’re sitting next to people who are basically professional musicians,” Dr. Couch said. “They get paid to play, and most of them have graduate degrees and advanced schooling.”

Tickets for Tuesday’s performance will be sold at the University Theater and are $6 for adults, $4 for seniors, military and students, and admission is free for CU students with a student ID.