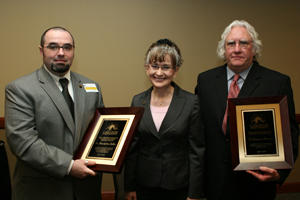 by the CU Office of Public Affairs

Cameron University recognized three faculty members with inaugural Faculty Awards in three categories during a special ceremony on Thursday. Recipients received a $1,000 stipend and a recognition plaque. The Faculty Awards were created to recognize full-time faculty members for their contributions to Cameron in the areas of teaching, service, and scholarship. Dr. Christopher Keller, Dr. Mattison S. Jenkins and L. Benson Warren are the recipients of the awards.

“Cameron’s Faculty Senate proposed recognition of faculty members for achievements in teaching, service and scholarship through these awards,” says Dr. John McArthur, Vice President for Academic Affairs. “We are pleased to recognize these dedicated educators for their outstanding commitment and contributions to student learning, Cameron University, and to the region we serve.”

Members of the Cameron faculty nominated their colleagues for the awards. In order to be eligible, the award recipient must have been employed full-time at Cameron University in a position with teaching as the primary responsibility for at least three years.

Award for Excellence and Innovation in Instructional Technology Integration

The Award for Excellence and Innovation in Instructional Technology Integration is recognition for outstanding and sustained contributions in the use of instructional technology to increase student learning. Dr. Christopher O. Keller, Associate Professor of Journalism, is the 2009-2010 recipient. Dr. Keller was recognized for his leadership in the development of Cameron’s convergence journalism initiative. A Cameron graduate, Dr. Keller earned a Ph.D. in Instructional Technology and Educational Psychology from the University of Oklahoma. Since joining the Cameron faculty in 2000, he has been an ardent supporter of technologies to improve communication between and among students and faculty. In collaboration with three other faculty members and with financial support from the Oklahoma State Regents for Higher Education, Dr. Keller has launched AggieCentral, a website that brings together the Cameron Collegian and CUTV in a central news media location, providing journalism and radio/television students with an unparalleled opportunity to work with technology crucial to their professional development.

Award for Excellence and Innovation in University Service

The Award for Excellence and Innovation in University Service is recognition for outstanding and sustained contributions in the area of university service to the Cameron University community, the region of southwest Oklahoma, the state of Oklahoma, and/or the field in which the recipient is active. L. Benson Warren, Professor of Art, is the 2009–2010 recipient.

During his 35 years on the Cameron faculty, Warren has a long history of quality work at the university. He continues to be extremely active, as his commitment to Cameron far exceeds usual faculty accomplishments when it comes to university service. Warren’s involvement is guided by personal pride and satisfaction in making a difference in the lives of students, faculty and staff. He has served as chair of Faculty Senate and as a member of most major university committees. He plays pivotal leadership roles on campus for the assessment and improvement of student learning and academic planning. He serves Cameron in the community as the university’s appointed representative to Lawton Arts for All and has been recognized by that organization with its Educator in the Arts award.

The Award for Excellence in Scholarship and Artistic Endeavor in the Educational Enterprise is recognition for the role of academic scholarship in the educational process by recognizing a Cameron faculty member who has demonstrated leadership in research, scholarly, or artistic activities that are fundamentally a collaborative effort with undergraduate students. This award will honor a CU faculty member, not only for adding to the store of knowledge in their discipline, but also for doing so in a manner that engages CU undergraduate students in the scholarly process. Dr. Mattison S. Jenkins, Professor of Communication, is the 2009–2010 recipient.

Dr. Jenkins joined the Cameron faculty 14 years ago. He is an active scholar on his own and in collaboration with students. His work includes producing and directing documentary films, both for his own work and for student-directed productions through his summer documentary class. In the documentary class, students research, write, film, edit and promote the opening of the production. Dr. Jenkins has traveled thousands of miles during the production of the documentaries, accompanying the student crews to locations across the United States. Many of the student documentaries have been showcased at leading film festivals and have won awards. He has been successful in negotiating airdates of many of the films on OETA, RFD-TV and locally on KSWO. Dr. Jenkins was cited in his nomination for his “remarkable ability to inspire students to learn not only the process of researching, writing, shooting, and editing a documentary, but also to value the artistic aspects of this process.”