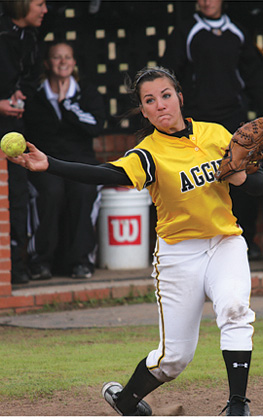 Fundamentals first: Drew Wright makes a throw to beat the runner from third base. The Aggies have balanced solid defense with power numbers at the plate. photo by Bennett Dewan

As the second half of the calendar semester begins at Cameron University, so does the most important part of the 2010 season for the CU softball team.

The day resulted in a split, with CU taking the first game 3-1 and SOSU winning the second battle 4-3.

According to coach Beth Watson, the team performed well defensively but saw unfortunate breakdowns at the plate.

“I feel like we played good enough to win both games, but the second one was just a back and forth struggle,” Watson said. “We put ourselves in the position to certainly get both of the wins, but we did not get quite enough hits when it mattered.”

Watson said she attributes this weakness to the continuous weather delays the team has faced in the season thus far.

“When you do not have a steady string of games and are not consistent in your playing, then the offensive aspect of the game really suffers,” Watson said. “Hitting is very repetitive, and there is only so much you can simulate in practice with live pitching, so when you do not see it you cannot get into a groove.”

Despite this minor lapse at the plate, the freshmen members of the squad continue to maintain their offensive statistics. According to the record books, Watson’s top three hitters are newcomers Drew Wright, Leslie Martini and Amanda Karth.

“The underclassmen continue to have good at bats and continue to understand their plan each time they go up to the plate,” Watson said. “This is a testament to their skill level; they are a very talented group.”

In addition to having a consistent offensive performance from her recruiting class, Watson said her upperclassmen are finally finding their way at the plate as well.

In recent games, seniors Callie Schlatter and Micah Lierly have both produced home runs in clutch situations. Schlatter earned her bomb in the sixth inning against SOSU, while Lierly won the game against Abilene Christian with hers.

“The upperclassmen are beginning to have better at bats,” Watson said. “We have gotten some really key moments out of them, and, if we could just get some more games in, then that will just make us better.”

As the Lady Aggies continue to progress through their schedule, the pressure to win is becoming intense. With more conference games approaching, Watson said she is worried about the lack of game time experience her team has.

“We have just begun working through conference play,” Watson said. “This is the most important part of our season, and I wish we had more games and more experience under our belt.  When you step onto the field in conference, you need to win, but the lack of innings has hindered our development as far as team chemistry and team concepts.”

Setting the uneasy feelings aside, Watson has confidence in her athletes and knows what kind of leadership it will take for every piece of the puzzle to finally fall into place.

“I always stress that the tone of the game starts in the circle with our pitchers,” Watson said. “If they come out ready to go and energetic then it will filter down to everyone else. If this team brings the right frame of mind and the right approach to each game, then they can play with anybody.

1 thought on “CU Softball team begins to come together”