Anyone who has been bitten by a fiddleback spider will tell you that it has a bite that is something that you never forget. That is exactly what Cameron alumnus, former Collegian editor and Creative Writing major Jeff Simpson had in mind when he came up with the idea to create an online literary and art journal.

“When I was a senior at Cameron I lived in a house that was infested with fiddlebacks. I used to kill six or more of them a day. That really made me get a level of respect for them,” Simpson said.

With that respect in mind it made sense to him what he should name his journal.

“If you kill something often enough, you develop a respect for it, at least I did,” Simpson said. “There is something beautiful, and dangerous, about them, and I thought ‘that is a perfect metaphor for what I want my journal to be,’ because I want the featured work to be a little dangerous and a little beautiful at the same time.”

After completing his Master of Fine Arts in Creative Writing, Simpson decided to make use of the Pepsi Refresh Project. As a result, Simpson is vying with thousands of others in the nation for a piece of the funding pie that Pepsi is offering to individuals who hope to find funding for all types of projects. The Refresh Project is a philanthropic program from Pepsi that is using an online voting process to allow the public to determine which projects get funded.

Wanting to produce something more than a simple blog-based run of the mill production, Simpson realized that the Refresh Project was ideal for his goal.

“I was trying to figure out how to find the money to fund the journal. There are journals that use blog templates and that is not that great of a formula,” Simpson said. “I don’t want to start my project and just be another online journal. I want to come out and be something great.”

With the Refresh Project in mind, Simpson went to work spreading the word about his idea and doing all that he could to rack up as many votes as possible. With voting nearing an end he is still pushing heavily to make sure that he gets a piece of the Pepsi project. Simpson says that the reason that his project deserves funding is because of the importance of journals. He feels that journals give the reader a window into the big questions in life.

“Viewing good work in a journal seems to surround the ontological question of what it is to be human. This is essentially the value of literature and art and therefore the value of a journal,” Simpson said.

Despite the common thread of literature that is associated with a journal Simpson’s production will feature more than just the written word.

“Each bi-monthly issue will feature a small sampling of fiction, nonfiction, and poetry. But also in every issue I am going to feature a musician and an artist,” Simpson said.

Perhaps one of the main goals of the publication is to feature work from individuals who would be overlooked by the mainstream journals.

“The idea is that the content of Fiddleback should challenge mainstream notions. I want to give work, that some people maybe aren’t ready for, some play and make sure that those things get to see the light of day,” Simpson said.

Clearly spoken like a Creative Writing major, Simpson has an eloquent explanation for the type of work he wants his publication to feature.

Though he is a strong contender in the running for Pepsi funding he can still use all the votes he can get. Consequently, he hopes that everyone will visit www.refresheverything.com and vote for his project. However, the voting ends on the 31 of the month so those who want to help Simpson out should do so soon. 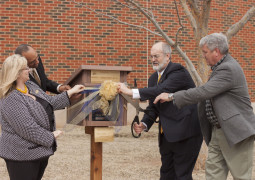 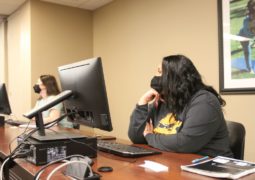 What’s so great about Zoom?

0 thoughts on “Alumnus competes for funding”