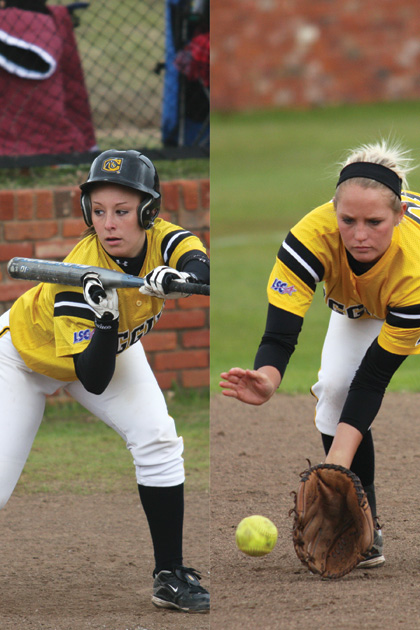 The Cameron University softball team has seen a rollercoaster start to the 2010 season, but that has not stopped the newest Lady Aggies from stepping into the spotlight.

“We have a very talented group,” Watson said. “There are some growing pains though. They do make mistakes, but they do not ever make the same mistake twice, and that has been a very good thing for us.”

Watson’s underclassmen have proven to be assets to the team in more than one way. Freshman Leslie Martini was named the LSC North Division Hitter of the Week a few weeks ago. Assistant coach Megan Young said she wasn’t surprised with Martini’s performance.

“From the time Leslie got here, we knew she was going to be something special,” Young said. “It did not take long for her to prove how good she was, and I believe we will continue to see good things from her.”

Martini, along with Wright, was also named to the Abilene Christian CBS Insurance Classic All-Tournament team that same weekend.

Fellow freshman Drew Wright has also worked hard for her spot on the team, and she said she feels lucky to be part of the athletic program at Cameron.

According to Watson, the biggest adjustment a freshman faces when transiting into collegiate softball is the different level of pitching. For freshman Amanda Karth, however, that adjustment came fairly easy.

“Summer league softball is very close to college softball,” Karth said. “I have already seen the faster pitching speed, so the only thing I’ve had to adjust to so far has been more movement on the ball.”

While Watson did spend a significant amount of time recruiting these outstanding players, she claims that much of their talent was already instilled in them before coming to CU.

“Recruiting is so much different now than it was even five years ago,” Watson said. “The freshmen that come in, provided they played on a quality summer team, have hundreds of games under their belt, so there are not too many situations they have not been in before. These athletes love the game, love to compete and love to win.”

Watson also believes that Cameron has the resources to provide its students with a quality and memorable college experience, making it easy to sell the university to prospective Aggie athletes she said.

“I feel like we can recruit kids here,” Watson said. “Cameron provides access to a great education, great facilities and great staffing. So when kids come in and make an immediate impact, it is a testament to all those things.”

Watson and Young both agree that this particular group of freshmen is very unique in that they already have good softball sense. They know the game, verbally communicate well and lead my example, all of which are things that cannot be taught by a coach.

“These players are young and the advantage to that is they do not know any better,” Young said. “Each day is new and they just go out there and play. It is just ball to them, and that really helps in the long run.”

For Watson and the team as a whole, having this group of young athletes in the lineup is beneficial in a number of ways, she said.

“All of these freshmen are self-motivated and hate to lose,” Watson said. “I feel like they know that this team can pull together and have a really good conference showing, and I think that is the best motivating factor for all my athletes.”