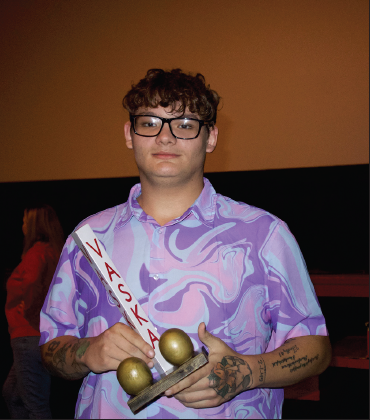 At 9:00 p.m n Oct. 25 at the Vaska Theater in Lawton, Dr. Matt Jenkins, professor of journalism and media production (JRMP) at Cameron University hosted a movie night competition. The competition was founded by Dr. Jenkins as a way to showcase student films in a friendly rivalry.

This fall semester is the second movie night that is set up as a competition. Before last spring semester, movie night was about showing the advanced student’s films that were made in the JRMP Corporate Video class, but because the class has not been offered every semester, Dr. Jenkins modified movie night to be an open competition for student productions.

“We started this semester by having a JRMP student competition,” Jenkins said. “They can produce a minute to five-minute movie with something to do with horror. They had a certain amount of time to make their little movie and then we show them at what we call ‘Movie Night’ held at the Vaska Theater and we have trophies and awards, and we have judges that come and judge them.”

This semester, the theme of the films was “horror” to get into the Halloween spirit. There were five film entries:

The judges made their decision for the films after the showing of each one. In fifth place was Gracie Norbury, fourth place was Alec Santos, third place was Jacob Carpenter, second place was Kalen Haynes and the first-place trophy was given to Jimm Sosa. Dr. Jenkins also gave the “Dan Perrin: I am a Thespian” award to the student who picked as the best actor presented in the films. This semester, the award went to Joshua Brown (junior), who appeared in both “Don’t” and “The Axe Murder.”

Sosa has won first place in the movie night competition two semesters in a row. In the spring 2022 semester, Sosa won the comedy-themed movie night competition with his film, “Pass the Ketchup”. Sosa explains how fun the experience is to have so many students and people in the community come to the theater and watch something that he produced.

“It’s definitely a nerve-wracking experience,” Sosa said. “You have so many people around you and you feel like you’re being judged in front of this big crowd and you just want everyone that’s watching to like it and you kind of worry about whether or not they will. In the end, it’s a really fun experience getting to see people watch my movie.”

Dr. Jenkins started Movie Night as a way for his students to show off their advanced films in a theater for a more realistic setting. It was also a way for him to invite directors of other independent films to show their productions as well as have Q & A’s with the students and directors.  Jenkins then decided to make Movie Night better by coming up with a fun competition for the JRMP students.

“I decided to have a competition with a particular theme,” Jenkins said. “Last spring, we had comedy, this fall we had horror. Movie night itself started because I wanted to show independently made movies to our students and have the directors come and talk to them.”

The next JRMP movie night will be Nov. 21 at 7:00 p.m. with the showing of the advanced student films for the Corporate Video class. It will be at the Vaska Theater located at 1902 NW Ferris Ave. Admission is free for students and the public. For more information about Movie Night, contact Dr. Matt Jenkins via email at mattj@cameron.edu.