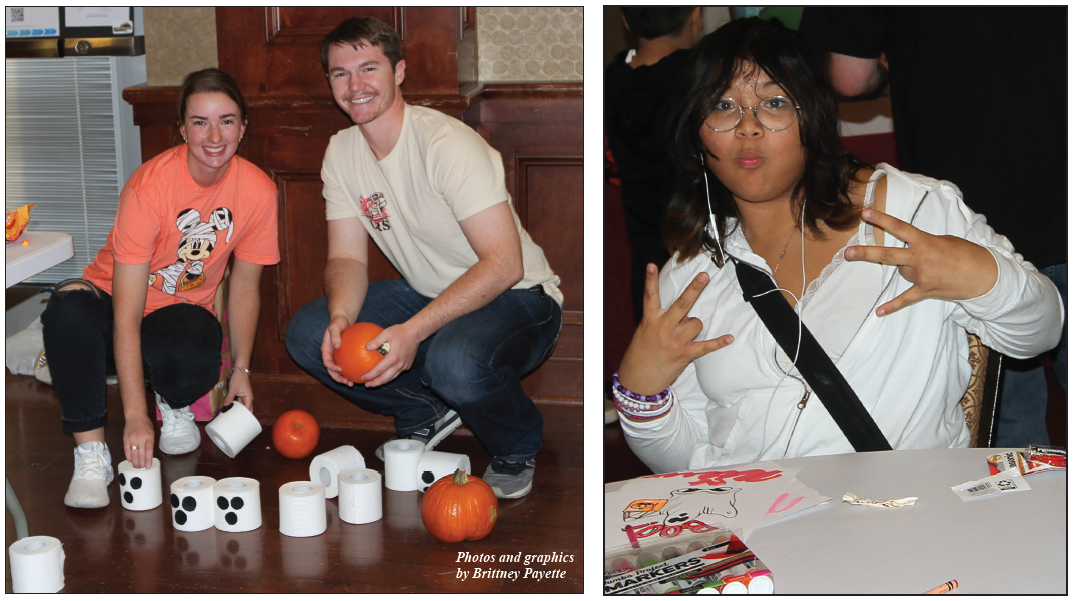 At 6 p.m. on Oct. 26 in the McCasland Ballroom in the MCC, the Office of Campus Life hosted a Halloween Carnival.

The carnival was free for everyone to attend. Lots of candy, games, and treats were available for the attendees. People could participate by throwing rings in a ring toss, knocking down bottles, coloring Halloween-themed pages, and more!

Junior Strategic Communication major Viaja Dewberry-Fulner was one member of Alpha Phi who participated at the carnival and helped put their game together and hand out candy.

“We wanted to do like an old kind of carnival game,” Dewberry-Fulner said. “Like the bobbing for the ducks or bobbing for the apples. So, we looked on Amazon and found some Halloween-themed ducks and thought that would be perfect, and so we put numbers on the bottom so they could bob for them.”

“I liked all of the organizations that got to come out and help with the community by giving them the opportunity to trick-or-treat in a different way,” she said. “The best part was probably seeing all of everyone’s little costumes and seeing all the different games.”

Dewberry-Fulner said she was impressed by the different games people came up with.

“There was no single game that was duplicated,” Dewberry-Fulner said. “There was so many different original, creative games.”

“We just recently started,” Johnson said. “We started the organization about a month ago, and the officer team got together and started looking around on Pinterest and stuff like that and talking. We saw one that we really enjoyed, which was pumpkin chunking. We figured kids would really like it.”

Johnson said he really liked that there were so many children who came to the Halloween carnival.

“Everyone’s having a fun time,” Johnson said. “It was a friendly environment. It’s pretty loud in there, so everyone’s talking and having a good time. It’s a blast. It really was better than I thought it was going to be.”

Johnson also said he would love to be able to participate in similar events on campus.

“Definitely involving the kids,” Johnson said. “Getting kids around the campus more and having them enjoy things. It would be awesome.”

Johnson said he hopes to attract more members for the Health Professions Society.

“We’re just trying to get some new members,” Johnson said. “We’re really interested in getting things rolling. Events like this are great for getting our name out there.”

For more information about future events, contact the Office of Campus Life at campuslife@cameron.edu.