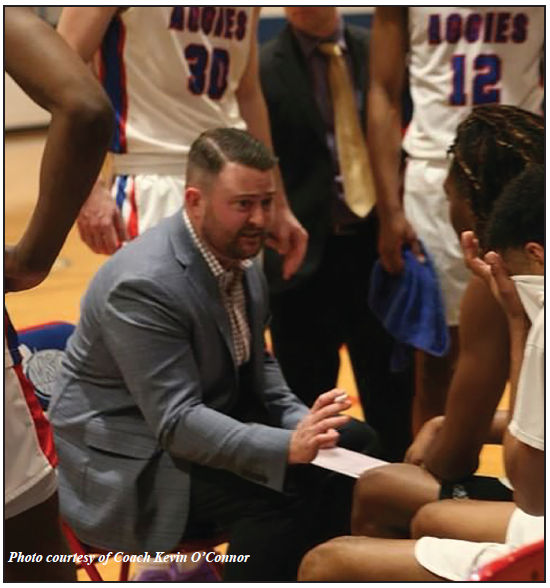 The Cameron Aggies start a new season with a new head coach; what will the Black and Gold offense look like during the Kevin O’Connor era?

The Aggies have seen five straight losing seasons, which saw Cameron only compile 36 wins in that span, including an uncompetitive 7-33 record in the last two seasons to end Andrew Brown’s tenure as the Aggie’s bench boss. Cameron Athletic Director In March of 2022 Jim Jackson named O’Connor as the 32nd head coach in Men’s Basketball history, after a great stint at Murray State College.

O’Connor comes to the Aggies with a successful track record winning 25 games at Murray State College in his first season during the 2021-22 campaign at the NAIA level. He spent time on Bruce Weber’s staff, the 2005 NCAA coach of the year who made a Final Four birth that season coaching Illinois earning Big Ten Coach of the Year honors before doing the same in the Big 12 conference with Kansas State.

Despite his age, Kevin O’Connor has been around a lot of successful programs and both he and the Aggies believe he is the right head coach to get the program back on track.

One of the main areas of improvement needed for the Black and Gold is an offensive overhaul from the clunky operation CU has seen in recent years.

When asked how he approaches his offensive strategy Kevin O’Connor said “We Emphasize playing together all the time. Giving up good shots in favor of great shots. The more assisted Field Goals we attempt the better.” This new offensiv playcalling is a big change from the isolation-heavy offense Cameron has been used to.

O’Connor calls it a “team first mentality,” adding the Cameron Aggies are going to be “fun to watch” this season. That has already rang true in Exhibition play when Cameron went down to play Division I Texas State and nailed 10 three-pointers on 25 attempts. Five Aggies had five or more points, while DeSean Munson led the way with 17.

Last Year, O’Connor’s Murray State College squad ranked in the 89th percentile of half-court offense, with a lot of success found on cuts, scoring ten points per game off the cut ranked them in the 86th percentile for NAIA.

With the passing style O’Connor described, it was evident in his team generating 24.7 spot-up shots per game last season.

That is where Colt Savage sees himself coming into play.

Savage said he is excited about the upcoming season under O’Connor, and for good reason.

The UCO transfer shot 42 percent from three-point land last year en route to 15 points per game. Savage is one of just four returners from last year’s Black and Gold squad.

O’Connor said he expects that the Aggies will “fulfill our potential, come together as a team, and be the best we can be.”

While he understands the Lone Star Conference is an “amazingly tough league” he believes Cameron is set to “surprise some people” with their competitive play on the floor this season.

The Aggies were picked dead last (16th) in the Lone Star Conference Preseason Men’s Basketball poll: CU only earned 68 points in the poll as Eastern New Mexico, who finished 15th, garnered 95 points. While you can not blame the voters for overlooking a team that labored to win three games a year ago, many around the program believe this team is better than they are given credit for with newcomers like DeSean Munson, Thai Elder, and Jaden Okon set to make an immediate impact for the Black and Gold.

The Cameron Aggies will get their season started on Nov. 11 as part of the Lone Star Conference and Rocky Mountain Athletic Conference crossover event, playing a pair of games in Colorado with UC Colorado Springs first up, and Colorado State- Pueblo the following day. The first home game for the new look Aggies comes on Nov. 19 against Rogers State in the Aggie Gym.

O’Connor said the Aggies’ non- conference slate is full of “quality Division II opponents” who are “extremely well coached, and have great players so we will need to play well.”

That non-conference slate will prepare Cameron for the grueling Lone Star Conference gauntlet which gets underway N v. 30 in Tyler, Texas against UT-Tyler.