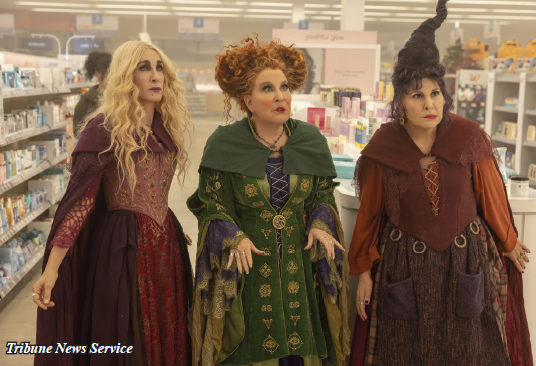 This review contains spoilers for the movie Hocus Pocus I and II.

The first Hocus Pocus movie was released almost three decades ago. To be completely honest, I have never watched the first movie in its entirety so I watched both of them in order to properly understand what made Hocus Pocus such a beloved movie during Halloween.

The Sanderson sisters and Billy Butcherson, the zombie, are returning characters from the first movie with the same actors playing their parts. This makes the second movie feel more familiar to people who have seen the first movie.

Both movies take place on the night of Halloween when legends say that the Sanderson sisters would make their return to get their revenge on Salem. The Sanderson sisters Winifred, Sarah, and Mary were three sisters who were hanged after killing a child on Hollow’s eve, also known as Halloween.

The second movie follows the same formula made by the first movie, but adds a modern-day twist. The protagonist of the second movie is Becca, a witch as well, but she doesn’t know it yet. There are weird occurrences throughout the movie that foreshadow her being a witch from early on.

This is very different from the first movie where the protagonists were three ordinary kids caught up in a bad situation.

Conflict in the second movie is not solved as easily, simply because the kids aren’t as knowledgeable as the cast of children from the first movie. This was made apparent through each interaction the children have with each of the sisters in the second movie.

In the first movie, they meet every situation head-on with minimal planning. The girls in the second movie have well-thought-out plans for every confrontation they plan to have with the sisters. There is also a lot of plot convenience happening throughout the movie that is cleverly crafted with comedy and witty humor.

The movie is predictable and far less grim than the first but, I don’t think that was the intention of this movie. In this movie, it was apparent that the writes took liberty to have more fun with the plot. If you are going into this movie expecting to be scared you are going to be very disappointed. Hocus Pocus is not meant to be a horror film, however it excels in other areas, especially comedy.

The movie is labeled as a comedy in contrast to its predecessor being labeled as a fantasy/horror. There was one scene in particular when the Rumba machine finds the witches and cleans the salt trapping them so they can escape. The witches are not familiar with the new technology as modern-day machinery is foreign to them. Playing into this adds to the overall humor. There are many instances of this in the second movie which adds something to the film that the first film didn’t have because of technological advances from the past three decades.

The ending could have been handled better but it was not that bad. The antagonist lost everything she held dear and turned to her enemies for help. While I wouldn’t expect Becca, the main protagonist to bring them back, I think giving Winfred the chance to choose her sisters instead of her powers would have been better choice. Instead, Becca simply failed to mention that she would be evaporated as well.

The storyline, while not as strong as the first film, was still good and further explored the story and characters introduced in the first. I personally wish that the sisters could have been a bit more evil in the second move, similar to the way that they were portrayed at the beginning of the first movie. However, I can appreciate the direction they were taking with the second film.

There could definitely be a sequel that explores not only the new witches in Salem, but mother witches, as well, However, even if there is not a sequel, this movie would be a good ending to the Hocus Pocus movies.

I would recommend the movie to people looking to watch a Halloween movie that isn’t too scary. This is a very kid-friendly movie with some adult jokes sprinkled in the mix.

I rate this movie a solid 6/10. Both movies are available on Disney’s streaming service Disney+.