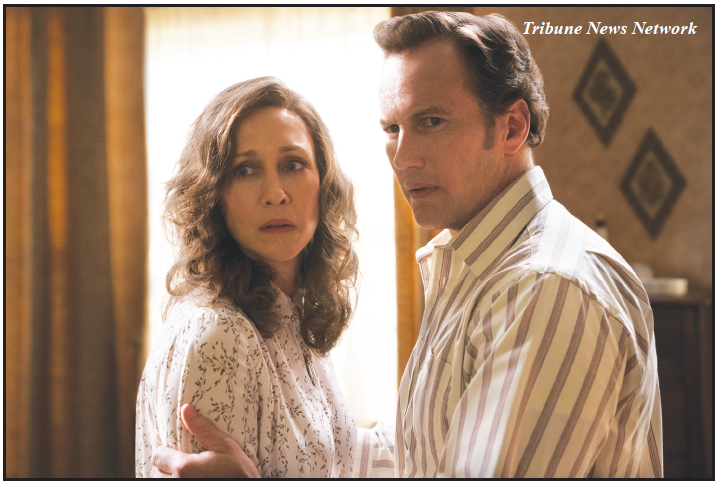 The Conjuring tells the story of a family who moves into a new house, only to find that it is haunted. Though, by no means is this an avant-garde concept, the movie manages to subvert expectations while still paying homage to classic films of the genre.

The movie was released in 2013 to both box office and critical success. According to Box Office Mojo, the movie earned $319.5 million at the worldwide box office against a budget of $20 million. The Rotten Tomatoes critical score is 89%, considered “certified fresh” by the website’s ratings standard.

The movie is directed by James Wan, who is no newbie to the world of horror. Aside from creating The Conjuring franchise, he also co-created the Saw and Insidious franchises. His other works include Furious 7 and Aquaman. Vera Farmiga (The Departed) and Patrick Wilson (Insidious) lead the cast as Lorraine and Ed Warren, two demonologists who attempt to help the Perron family when the matriarch of the family Carolyn (Lili Taylor, Mystic Pizza) begins experiencing strange things once she and her husband Roger (Ron Livingston, Office Space) move their family into the new home.

Part of what sets The Conjuring apart from other movies is its blend of fact and fiction. The characters Ed and Lorraine Warren are based on real people who worked as paranormal investigators from the 1950s until the 1990s. Before The Conjuring, the Warrens’ Amityville investigation inspired the movie Amityville Horror and its subsequent sequels and remakes.

The Conjuring itself is based on two of the actual Warren investigations. The first being a possessed doll named Annabelle, discovered in 1968. The second being the Perron family and the haunting of their home in 1971.

The setting is quintessential late-1960s/early-1970s, from the soundtrack to the haircuts and attire. The acting is borderline corny at times, harkening back to the cheesiness of 1960s and 1970s horror cinema. The score evokes films like Amityville Horror and Poltergeist.

The movie tells the story in chronological order, first explaining the origins of Annabelle and how she came into The Warren’s possession.

The film then shifts three years ahead and the audience is formally introduced to the Warrens themselves, who are mentally tired from their investigations and seek a break to focus on family. They have a daughter and want to be able to spend time with her. This all changes when the Perrons call on their services to help with their home.

The Perrons have just moved into their new home, and they are excited for a fresh start. The parents, Carolyn and Roger are joined by their five daughters, each of whom begin noticing or experiencing strange phenomena upon moving into the new home.

The eldest is woken up each night by the repetitive slamming of her wardrobe doors, while the youngest develops an imaginary friend named Rory. Strangely, the clocks also seem to stop each day at 3:07 A.M. Carolyn begins to wake up with new bruises and starts to hear voices in the house while her children are sleeping. The Warrens empathize with the family and agree to help.

Though the plot itself is nothing new, James Wan manages to make this movie feel fresh and still elicit terror from the audience.

A beautifully executed plot device occurs during a game the children play with each other and Carolyn. The game is “hide and clap,” a play on “hide and seek” where the seeker remains blindfolded and must find the hider(s) by asking for three claps, given over a period of time. Each time the game is played in the movie, the plot is moved forward.

The first time the game is played, the children inadvertently find the house’s boarded-up cellar. The second time, Carolyn has her first encounter with a supernatural entity, though her blindfold inhibits her from seeing anything. The third time, the entity forces Carolyn to play the game, temporarily forcing her into the cellar, thus leading them to call the Warrens.

The most horrifying parts of the movie are not the jump scares, or the faces of the evil entities, or even the doll Annabelle (who is creepy enough in its own right). The scariest moments are the excruciatingly long takes, the shots in which the suspense of the moment is breath taking.

What Wan does so well with this movie is he takes his time. He lets the audience linger on a moment, often for so long it is uncomfortable. It creates a sense of unease because it forces the viewer to put themselves in the story, as if it’s happening in real-time.

Looking past the terror, one can also find two separate, equally moving sets of love stories. Lorraine and Ed, as well as Carolyn and Roger, are still madly in love despite the many years they have each been together. Their love for their children is even stronger. The movie particularly leans into motherly love, with Carolyn and her children and Lorraine and her daughter. There is a humanity to the characters and their actions are always motivated by love for their family.

Be sure to add this movie to your spooky movie marathon on Halloween this year. For horror fans old and new, The Conjuring is sure to provide something fresh and entertaining to an otherwise tired plot.

Those who are not keen on the genre may still find merit in the storytelling and elements of humanity, though they will likely wish to turn the movie off as soon as the doll Annabelle makes its first appearance, approximately thirty seconds into the movie.