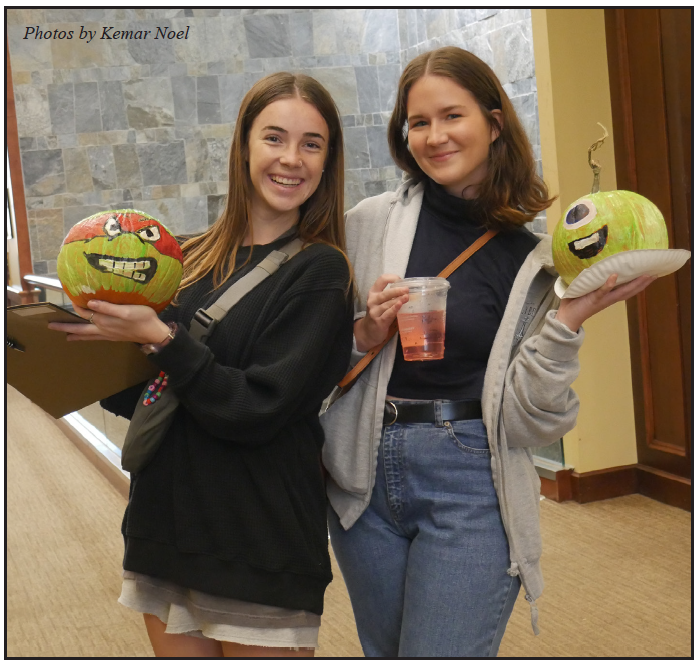 At 6 p.m on Oct. 11, the Programming Activities Council (PAC) started the week with a Spooktacular Pumpkin Painting Event to help students get into the Halloween Spirit.

The person in charge of this whole event was Alexandra Moya, a sophomore attending Cameron University. The event had lots of different pumpkins with various sizes to choose from depending on the piece you wanted to submit.

There was a variety of paints and brushes to choose from as well as music to keep the event festive and lively. There was no lack of supplies or entertainment for the pumpkin artists who were participating, which made for an eventful evening. It was clear that there was a lot of careful thought and planning that went into the event.

Alexander Moya the leader of this PAC sponsored event spoke about the planning that went into making the pumpkin painting happen.

“So, we looked back on our previous events and during November last year we did a gingerbread house building competition and we hadn’t done a competition this semester so we wanted to see and try it out because it was really eventful last year, and as you can tell, there is plenty of people in there,” Moya said.

The event had a two hour time limit, meaning that any pumpkins that were not submitted before the end of the event would not be considered for voting. Voting took place on PAC’s Facebook page and the people with the top five votes would take home a prize.

Likes and reactions would determine the winner and allowed students to vote on participants. Students were encouraged to share posts of their creations to help get more votes and increase their chances of winning. The winners would be announced on October 12, the day after the event had concluded. The prizes for the top five would be a squish-mallow and a Halloween candy bag.

To make sure that everyone had the same amount of time, the doors opened for everyone at six o’clock on the dot and only then were they allowed to start painting.

This was the first time PAC has done a pumpkin painting competition and there were a lot of students that came out. When asked why they didn’t do the traditional pumpkin carving PAC members said it would be too messy to clean and not everyone may know how to carve but everyone can paint.

“Rotting pumpkins, you know, once you start to carve the pumpkins they rot and smell and we don’t want to do that to campus,” Moya said. “I do plan on painting one. After this, I am going to go ahead and sit down and paint me a pumpkin.”

Everyone had unique pumpkin ideas, that much was visible when viewing the painted pumpkins. A majority of the people there have never painted a pumpkin before but were down for the challenge and experience. There were a lot of talented people painting and there were some people who simply came to enjoy the event.

Rania Robles a concurring Cameron student spoke about what she liked most with the event.

“It was so much fun. I love painting. I like looking at everybody doing something they like and having fun with it and not caring if it is really bad. Even if it is really bad they are proud of it and still submitted it.” Robles said.

There were over forty people that submitted an entry and even more that participated in the activity. The overall success of the event was due, not only to the amount of students that attended, but also to the number of participants and entries for the event.

There are no future PAC events planned this year, as of yet. However, you can stay up to date with upcoming PAC events by checking their social media and be sure to attend next one.