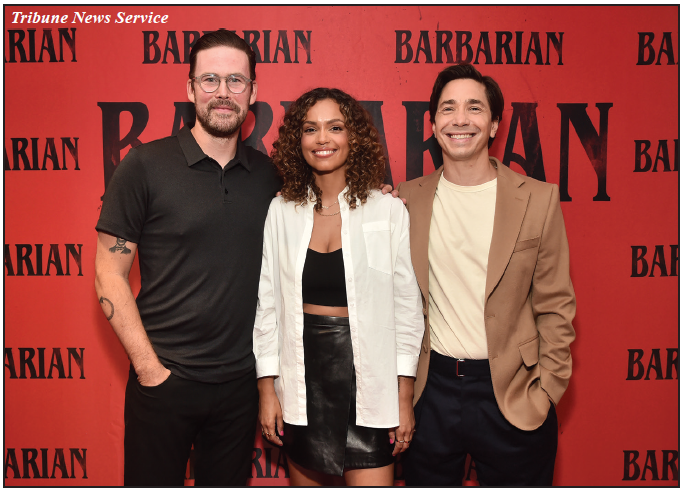 “Barbarian” is among the weirdest and most unique horror films I have seen. I went into the movie theater not really knowing what to expect.  I walked out thinking that “Barbarian” was a “pretty solid horror film.”  I love horror movies, so my expectations were relatively high.  Did the film meet my expectations? Well, yes and no. As unique and fascinating as this film is, it is definitely far from perfect.

From the first shot, there is an immediate sense of dread and creepiness.

Adding to the creepy-factor is the near-perfect musical score by Anna Drubich. This film is very good at building its eerie atmosphere. From the get-go, I knew something was off. Each and every little weird and creepy occurrence built upon the tension very well.  Little by little, viewers learn more and more about what is going on in the story.

The story follows Tess Marshall, portrayed by Georgina Campbell, a woman who has booked a remote home in a rundown and questionable neighborhood to interview for a job.  Every surrounding house, except for the one she had booked, is in disrepair and look as if they have not been maintained for many years.

The audience learns that a man named Keith Toshko has also rented the property. Toshko is portrayed by Pennywise himself, Bill Skarsgård. Both Marshall and Toshko are completely unaware and baffled to learn that they have both booked the same house.

Strange things start to happen in the film only get stranger. For example, in the basement lurks a secret hallway that leads to a secret staircase that leads to dark and eerie cave-like tunnels filled with cages of various sizes. Something lurks in these tunnels, which was the last thing I was expecting to see.

When I realized that Skarsgård was in the film, I immediately assumed he was going to be some kind of villain. I was astonished to be proven completely wrong. Unlike the demonic clown he portrayed in the “It” films, Skarsgård’s character was actually a somewhat eccentric but kind young man.

Seeing the film for the first time without doing any prior research, led to me say something along with lines of “what the heck is going on here” several times during the film.

The story can feel disjointed and confusing at first, but towards the film’s ending, things start to make a lot of sense.

AJ Gilbride, a sitcom actor, portrayed by Justin Long, is the one character I did not like. The house that Marshall and Toshko have booked is one of his rental properties. He was intentionally written to be an extremely unlikable character. He was not very funny to me, and his character just came off as obnoxious and annoying.

While Long’s performance is good, his character was not very relatable. On the other hand, Tess and Keith are quite relatable and likeable characters. Both Campbell and Skarsgård give excellent performances in this film.

On a technical level, this film is extremely well-made for the most part. The use of lighting and color made the film visually appealing to watch, despite the overall creepy and dark atmosphere. Some of the editing during the action scenes could have been improved upon, but that did not take away from the film. There are some moments that come off as unintentionally funny.

This film is extremely dark and unsettling, and not for the faint of heart. Some of the story elements can make you feel uncomfortable and can get under your skin.

The main antagonist, named, ‘The Mother’, is a hideous and deformed woman who lurks in the tunnels. She is portrayed by Matthew Patrick Davis. Anyone that has the misfortune of living in the house or any of the neighboring houses could potentially get kidnapped by her and taken away to the tunnels.

While hidden away in the dark tunnels, ‘The Mother’ wants for her victims to act like her “children”.

This film is very weird. But to be fair, many of the best horror films ever made has weird plot elements. Overall, I enjoyed this film, even with the perceived imperfections.