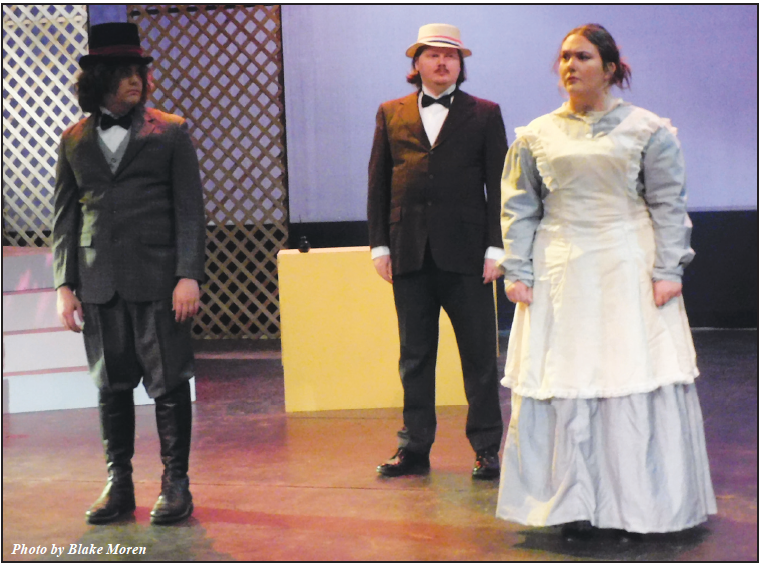 The play was adapted from a Margaret Atwood novel of the same name, released in 1996. The novel itself was loosely based on a real murder trial in 1843 of wealthy farmer Thomas Kinnear and his housekeeper Nancy Montgomery. Grace Marks was convicted of the murders. The problem is: she claims not to remember anything.

Atwood’s story leads readers through the moments Grace does claim to recall as she is interviewed by psychiatrist Dr. Simon Jordan.

In a time of television crime dramas like “Law and Order,” where a criminal is caught and their motive is uncovered in the span of 60 minutes, “Alias Grace” stood out. The novel is enigmatic, choosing not to spoon-feed the narrative to the reader but rather making them come to many of their own conclusions regarding Grace and her crimes.

Playwright and adaptor Jennifer Blackmer wanted to convey that same uncertainty in the stage play.

Leading the cast of Cameron’s adaptation of Blackmer’s play were Araia Heathcott as Marks and Curtis Myers as Jordan. Rounding out the cast were Maliah Davis as Rachel Lavell, Shayson Lenee’ as Nancy Montgomery, Victor Quinones as James McDermott, Dakota Maggard Weeks as Thomas Kinnear, Cole Nowlin as Jerimiah/Dr. Dupont, and Jaiden Standridge as Mary Whitney.

The production crew was led by Assistant Professor, Dr. Natalie McCabe as director, with a hefty production team behind her.

The Cameron University Department of Art, Music, and Theatre Arts has three more productions scheduled for their 2022-2023 season.

Despite the story’s ambiguity, Blackner had a clear perception of Marks’ character and purposeful intentions for how she felt Marks should be portrayed in the adaptation.

“Atwood’s story is propelled by a woman who refuses to be a victim, a woman who eludes every attempt to define her,” Blackner said, “a surprising, smart, funny and charming woman who is, quite possibly, a murderer.”

A question a viewer may have is; does this properly translate to the stage and pay proper tribute to the novel, as well as the 2017 Netflix adaptation? Can a stage production properly convey a character whose thoughts and dialogue are both interwoven and juxtapose one another to the point that it becomes difficult to see where one may end and the other begins?

The answer is, yes, and it is executed very well.

Cameron’s theater department put a great deal of heart and care into their stage adaptation. Had this been done poorly, it could leave audiences confused and dissatisfied.

The story must be told in a way which allows the audience to leave with the ability to decide for themselves. The production created a poster board outside the theater which asks the audience if they believed Grace was telling the truth. Marbles were provided to the audience and they were instructed to put the marbles into cups corresponding to the answers “yes” or “no.”

The production team utilized lighting to distinguish inner from outer dialogue, thought vs action. The stage was cast in an ominous red light which indicated harsh, and the sometimes frightening inner-thoughts of Marks and other characters.

Heathcott dazzled as Marks, which was no small feat. Heathcott portrayed a perplexing character whose motives are entirely unclear. Her character was as terrifying as she was terrified, and as chilling as she was warm.

Standing toe-to-toe with her was Myers, who portrayed Jordan and served as the antagonist of Marks.

However, things are not always as they seem. The storyline revealed that Jordan may have been keeping secrets of his own.

Myers skillfully portrayed a man who must both serve as a guide for the story and slowly reveal to the audience that he may not be a reliable character.

The supporting cast filled out the rest of the production with characters who are sometimes convenient and as shrouded in mystery as Marks herself. There were moments in the story which felt a bit sluggish but were propelled forward by the capable actors.

The play’s storyline felt particularly appropriate for the time, just as it may have felt during the novel’s initial release in 1996.

Given the current landscape of women’s rights, the story of Grace Marks will resonate with modern women who may sometime feel the need to conceal part of their identity.

Regarding the aforementioned Netflix adaptation, writer Sarah Polley connected Marks’ story to the story of the women in another Atwood novel, “The Handmaid’s Tale.”

The play was a worthy opener for the theater’s new season, and I look forward to seeing what this team will put together for the next production in November.