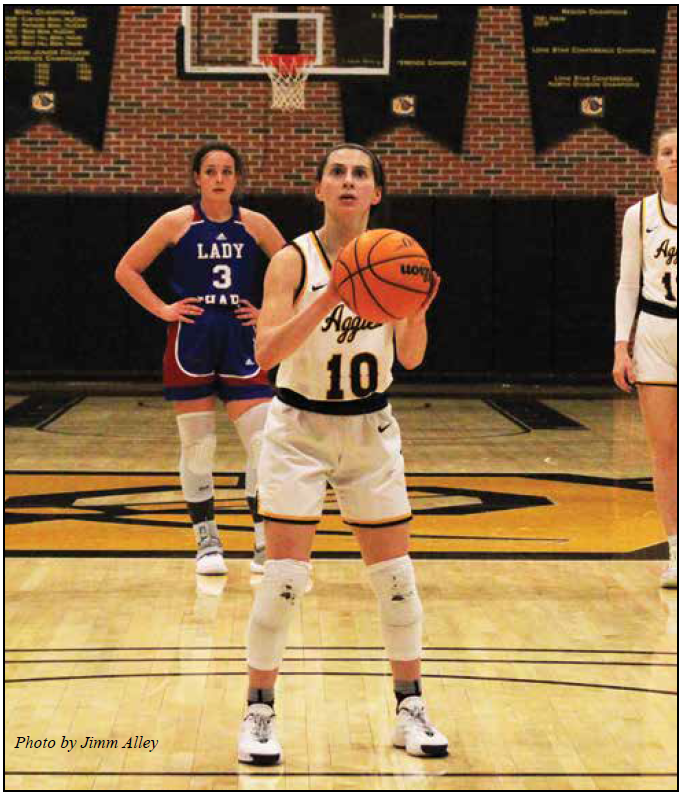 The Cameron Aggies finished with a 17-11 record a year ago, going 11-5 within the prestigious Lone Star Conference. Winning 17 games was the most the Aggies have turned in during a single season in 20 years. The Black and Gold dominated at home, protecting the Aggie Gym to the tune of a 10-6 record which included a Lone Star Conference tournament home win over the 11th-ranked Eastern New Mexico Greyhounds before falling to 3rd-ranked Texas A&M-Commerce in the next round.

At season’s end, the Aggies saw head coach Emma Andrews depart from Cameron and take over as the bench boss for the University of Central Oklahoma Bronchos. Along with coach Andrews, the program’s all- time leading scorer, Maighan Hedge, graduated following the season; she is just one of four key contributors who are no longer with the Aggies.

CU only features four returners from last year’s squad, but Jeff Mahoney is excited about the new additions to the team.

Mahoney had an interesting path to get here, while he has been an assistant coach for the past three years, and even filled in as an interim bench boss for the men’s program mid-way through the 2021-22 campaign, this will be his first time leading a college program on a full-time basis. What has changed the most for the long-time assistant? “Paperwork,” Mahoney explained at Lone Star Conference Basketball Media Day.

The first-year head coach said they are trying to “take the next step” they are no longer “content” with a conference tournament or just simply making a regional.

With the transfer rules loosened by the NCAA, I asked King why she elected to stay at Cameron, “I am big on loyalty. I am loyal to coach Mahoney,

I love the way he coaches, that is 100 percent why I wanted to stay,” she said.

King, a veteran guard from Harrah, Oklahoma took home All-Freshman team honors in 2020-21 and was named the Aggies Athletics department’s student-athlete freshman of the year.

King played for Mahoney back at Harrah high school before they both eventually landed with the Aggies.

Despite the historic success a year ago, the Lone Star Conference preseason poll still pegs the Aggies for 8th.

“It doesn’t really surprise me,” Mahoney said. “Somewhere in the middle is about where we finished last year, one thing about the Lone Star is anyone can beat you any night.”

Mahoney said the focus for this year’s team will be “More balanced. We have to be more consistent, we are not going to shoot the ball on the perimeter as much as we have in the past…we want to be able to score the ball inside a little more.”

King will play a big role in this team getting over the hump, the scrappy defensive guard when in detail about what she thinks has changed for her and the team.

“I want to try and set the tone in a positive way,” she said. “There has been a shift in our mindset, we have high hopes for this year and I think everyone is 100 percent in, and we all want a ring, to be conference champions.”

The Cameron Aggies brought in nine new players to this 2022-23 squad, including another Division-1 transfer Mikayla Peterson who comes to the Aggies via Weber State and marks the second Black and Gold player with DI experience along with Korie Allensworth who spent her freshman season at Louisiana Tech.

Claire Dodds, Alena Wilson, and Hallie Horton, all make the jump to the DII level here at Cameron from the JUCO ranks after putting together impressive careers.

The Cameron Aggies will start their season on Nov. 11, in Colorado Springs, Colorado, for a two-day stint at the Rocky Mountain Athletic Conference and Lone Star Conference crossover tournament as they play UC Colorado Springs on the 11th and Adams State on the 12th before returning to the friendly confines of the Aggie Gym on Nov. 15 to take on Harding University.

While the Aggies have a lot of new comers and visions of rings on their fingers at the end of the year, they can reach those expectations with the veteran leadership of Katie King and head coach Jeff Mahoney, both of whom were a part of the last Aggies squad to reach the DII NCAA March Madness tournament.