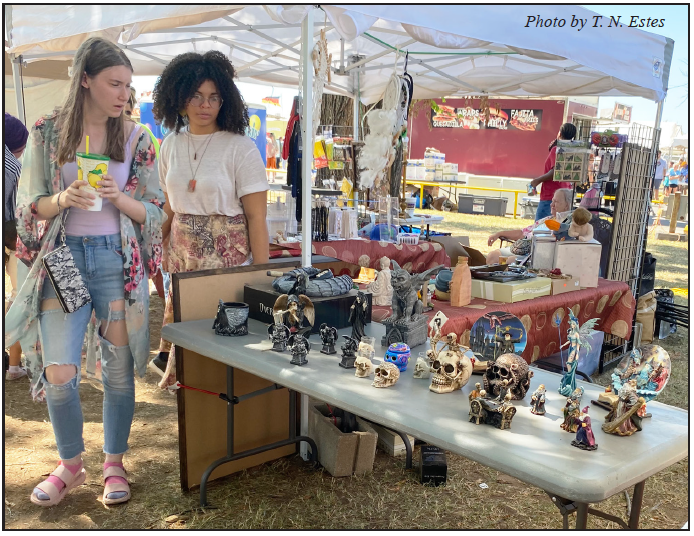 On Sept. 23, at 5 p.m. at Elmer Thomas Park in Lawton, OK, the 43rd annual International Festival kicked off, and ran through the weekend, ending the evening of Sept. 25. This free, three-day event began as a
way for the Lawton/Fort Sill area to celebrate the diverse heritage within the community.

The festival was jam-packed with food, fun children’s games and activities, demonstration artists, vendors, music and other multicultural experiences that make the Lawton/Fort Sill area so unique.

The event began with an opening ceremony, including a naturalization ceremony for new American citizens.

Immediately following, was the Parade of Nations which began at 5:45 p.m. Food is a major draw at the
International Festival. Vendors were on-site with a variety of food choices including, gyros, Greek food, street tacos, snow cones, funnel cakes, fried Oreos, tornado fries and whole turkey legs.

Pecos Pete’s was one unique vendor who had a wide variety of iced teas and beverages to choose from. For $25 a guest could purchase a commemorative jar, with unlimited refills all weekend long.

The spirits were lively around the area where music was performed.

Cultural dance was being performed both on and off-stage. Many people danced and relaxed in their chairs and enjoyed the mild, fall-like temperatures.

Grammy-nominated orchestra group, Grupo Fantasma, was one of the musical headliners at the festival. They delighted patrons of the festival until 9 p.m. The merchandise table for Grupo Fantasma was steadily busy with patrons who purchased their t-shirts in support of the group.

The International Festival gives local artists a chance to perform and be seen by the community.

The community of Lawton/Fort Sill is given the opportunity come out and buy unique, locally made items. Over 70 vendors were present at the festival selling unique items such as jewelry, international flags, toys,
t-shirts and art.

Elkins described how he and his wife became involved with the International Festival. “We’ve been coming here about ten or twelve years,” Elkins said. “My son used to dance in the Comanche Nation pow-wows and we followed him around the area when he performed. We would set up a booth with a few items for sale, which is how we got started working as vendors.”

Another vendor at the festival was Gwen Ponder, owner of the retail shop “Just Because,” located in Duncan, OK. The booth had a variety of eclectic goods, art and prints for curious-minded patrons to choose from.

Ponder has been attending the International Festival as a vendor for three years and talked a little about why she enjoys participating in this event.

“I enjoy everything about participating in the International Festival,” Ponder said, “I like the music, I like the people, of course the food and the money.”

The parking at Elmer Thomas Park was great and handicap accessible.

There were no issues, even during busy peak times at the festival finding a place to park. All parking was free and walking trails guided patrons toward the center of festivities.

The City of Lawton provided free golf cart rides for the many patrons to and from the festival. Traffic and parking should never be an influence which deters would- be festival goer from attending any event held at Elmer Thomas Park. The parking process flowed seamlessly.

Elmer Thomas Park and the City of Lawton planned very well for large crowds of people.

Plenty of seating was also available under the shade of a tree or canopy.

An artillery tank, which is a permanent staple at Elmer Thomas Park, was an ever-present reminder that Lawton is built around the military base. The military presence in the community is a major contributor to the multiculturalism of the Lawton/ Fort Sill area.

The International Festival occurs annually during the fall season in Lawton, OK. The community is encouraged to attend and learn more about the multiculturalism that is present in the community.