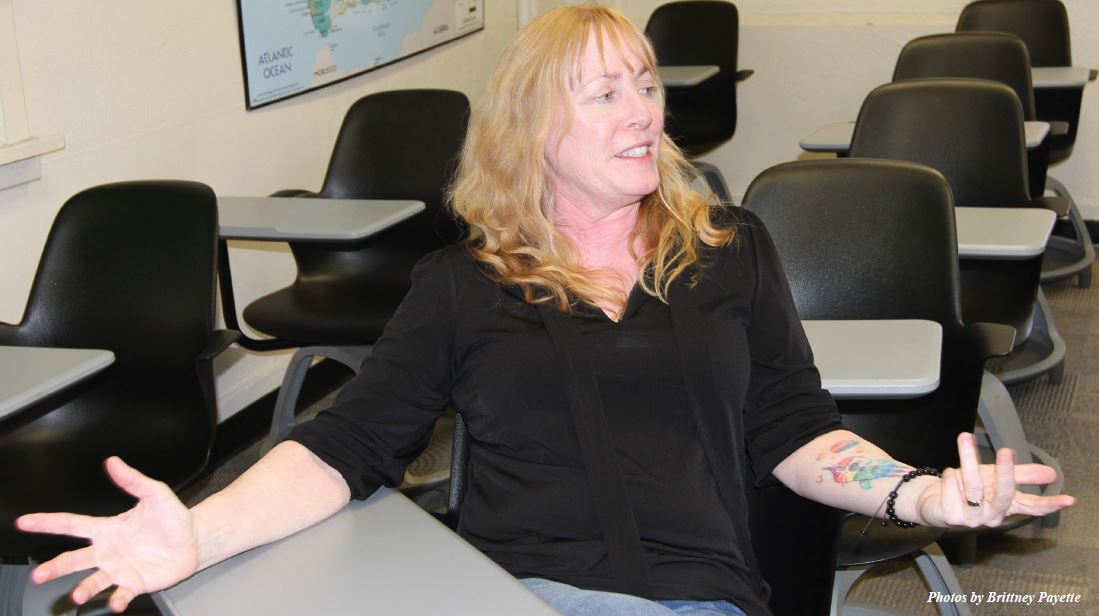 Westerns in a different direction

At 6:30 p.m. on March 25, in the McCasland Ballroom, Cameron’s Magic Lantern Film Society had guest speaker Dr. Sara Spurgeon discuss how the issues of race and gender in the 1956 film “The Searchers” were depicted, along with their relevance today.

Dr. John Morris, the faculty advisor for Magic Lantern, introduced Spurgeon before the screening of the movie.

“One of the reasons I wanted to have a lecture about “The Searchers” is that it’s based on the novel, which is also based on the history of this area, Texas and Oklahoma,” Morris said.

Spurgeon, the guest speaker at the screening, is a published author of scholarly and fiction writings, and she edited the anthology Cormac McCarthy. Spurgeon is an English professor at Texas Tech University, where she teaches literature of the American West and Southwest.

“Recently, I’ve been teaching a class on Native American Sci-Fi, both at the undergraduate and graduate levels,” Spurgeon said. “I’ve always sort of liked Sci-Fi and the historic connections between science fiction and westerns. They’re sometimes called sibling genres.”

Spurgeon said that both the science fiction genre and the western genres often have a similar story of civilized people making first contact with the Indians or aliens who brave white men then fight with guns.

Spurgeon said that she was very lucky that she was able to be mentored by Annette Kolodny. The latter was one of the founding foremothers of feminist theory and eco-critical theory as scholarly areas.

“She was a force of nature, all on her own, and was an amazing mentor to have,” Spurgeon said. “Annette Kolodny was an inspirational figure for me.”

Spurgeon said that “The Searchers” was loosely based on the story of Cynthia Ann Parker, who, along with her brother, was taken by the Comanche tribe. There, she grew up, married, and had children. John Ford directed the 1956 film.

“We still talk about Westerns because the issues that they bring up are still ones that struggle with as a country,” Spurgeon said. “Why do we still watch The Searchers? Because Ford takes that cliched story that we think we’re going to see and turns it into something unexpectedly dark and complicated.”

Spurgeon said that Westerns allowed people to project current controversial issues such as race and gender in a more comfortable way because they could have it set back in time.

“As a genre steeped in history, Westerns are frequently a fantasy version of the past that reflects what people wanted the past to look like in the 1950s.

Freshman Business major Alyssa Martinez is the Vice-President for the Magic Lantern Film Society at Cameron, and she was at the screening for “The Searchers.”

“We get to see another point-of-view and like you get to see how this man who would normally be like the white savior, is kind of also the villain in the story,” Martinez said. “He is an anti-hero. Before it was cool.”

For more information about Magic Lantern and any of their upcoming events, please visit the website at https://www.cameron.edu/magiclantern/about.

“The Searchers” film was directed by John Ford and was based on the same name novel that Alan LeMay wrote. In the classic Western, Confederate American Civil war veteran Ethan Edwards and his nephew Martin Pawley journeyed for five years to find Ethan’s niece and Martin’s sister, Debbie. A Comanche tribe took Debbie at nine when the tribe killed her family and burned down their ranch. However, as the duo embarks on this journey, Ethan’s intentions are questioned- does he want to save Debbie or kill her? Is Debbie still the same girl they knew before the Comanche tribe took her? The film starred John Wayne as Ethan, Natalie Wood as Debbie, and Jeffrey Hunter as Martin.