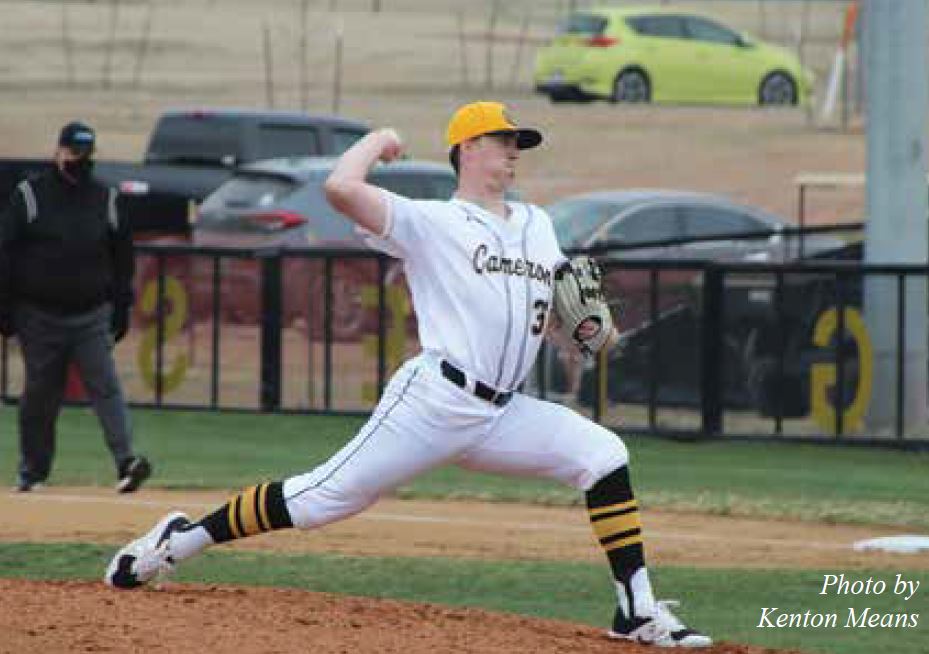 In the Spring 2022 season with a score of 11-23, the Cameron Aggies Baseball program has surpassed their win total from last season.

Michael Womack is in a new role for his final season. How is the Lawton native adapting to change?

Michael Womack said this season is the second most successful run he has seen at the college level, rivaling his first year at Cameron with the Team’s score of 23-29 – qualifying into the Lone Star Conference Tournament and making it into the LSC Championship game.

However, the Aggies lost the title game to West Texas A&M, and promptly made a coaching change – promoting top assistant coach Kyle Williams to the head coach position.

As a result, Change has been the only constant in Womack’s coaching career.

After an illustrious career at Lawton’s Eisenhower High School, Womack was a prized Baseball recruit, and went to work at Colorado Northwestern.

After a season in Colorado, however, Womack decided to return to Lawton.

“It just felt right to come back to Lawton,” Womack said.

Unfortunately, the pandemic happened in the midst of his second season – of which he was seeing great success.

Michael Womack said he was placed in the dream rotation, starting five games for the Aggies in the shortened 2020 season; he also came back for two more appearances.

He struck out 29 batters over the course of 28 innings, and even flirted with a no-hitter into the seventh inning against UT Tyler.

The Pandemic obviously changed things, Womack said. “There was so much uncertainty – the season just ended, and no one knew what was going to happen,” Womack said. “I just got back to work, practicing on my own, preparing for what I thought would be my last season.”

That was until the NCAA passed a new amendment granting an additional year of eligibility to those student-athletes impacted by the shortened 2020 season.

“I did not take it for granted, it was a chance to continue to play the game I love here at Cameron,” Womack said.

Following the 2021 season, in which the Aggies did not have double-digit wins, Kyle Williams elected to bring Womack out of the bullpen for the 2022 campaign. “It is different,” Womack said. “as a reliever, you never know when you will be called on – you have to stay ready. As a starter, you are told ahead of time when it is your day so you can set everything up for your routine. In the Bullpen, we never know when a situation will come up where we are needed. It is a fun challenge.”

With the fun came other challenges for Womack, who dealt with a hamstring injury that kept him out of the first two series of the 2022 year.

His first relief outing for the Aggies came in February against Eastern New Mexico, where he struck out three batters during his one inning of work.

Against Permian Basin for his second outing, Womack was allowed to go longer into the game, pitching one and two-thirds innings with three strikeouts with no runs, no walks or hits allowed.

The following weekend against UT Tyler, Womack gave up his first hit still striking out two batters in his single frame of work, but the run did come across to score.

Four of Womack’s seven appearances during the 2022 season have seen him allow one run or less, never allowing more than two in any opportunity.

Despite not earning bulk innings as a starter anymore, Womack still has 12 strikeouts on the year, which is good enough for sixth-highest on the Cameron Aggies pitching staff without reaching double-digit innings yet.

Womack said in his free-time he teaches baseball in Lawton.

“It is so rewarding, getting to teach and share the game I love, and improve players’ games,” Womack said.

This has led to his career after college as a high school baseball coach.

However, coaching can wait, as Womack still has 16 collegiate games left, and the Aggies are hoping to right their season.

“We know we have the talent,” Womack said. “We want to win games down the stretch and make the Lone Star Conference Tournament. We know if we can do that, anything can happen…Look at 2019.”

Womack said he hopes he can be part of the turnaround for the Aggies as they finish their season with four straight Lone Star Conference attendances.