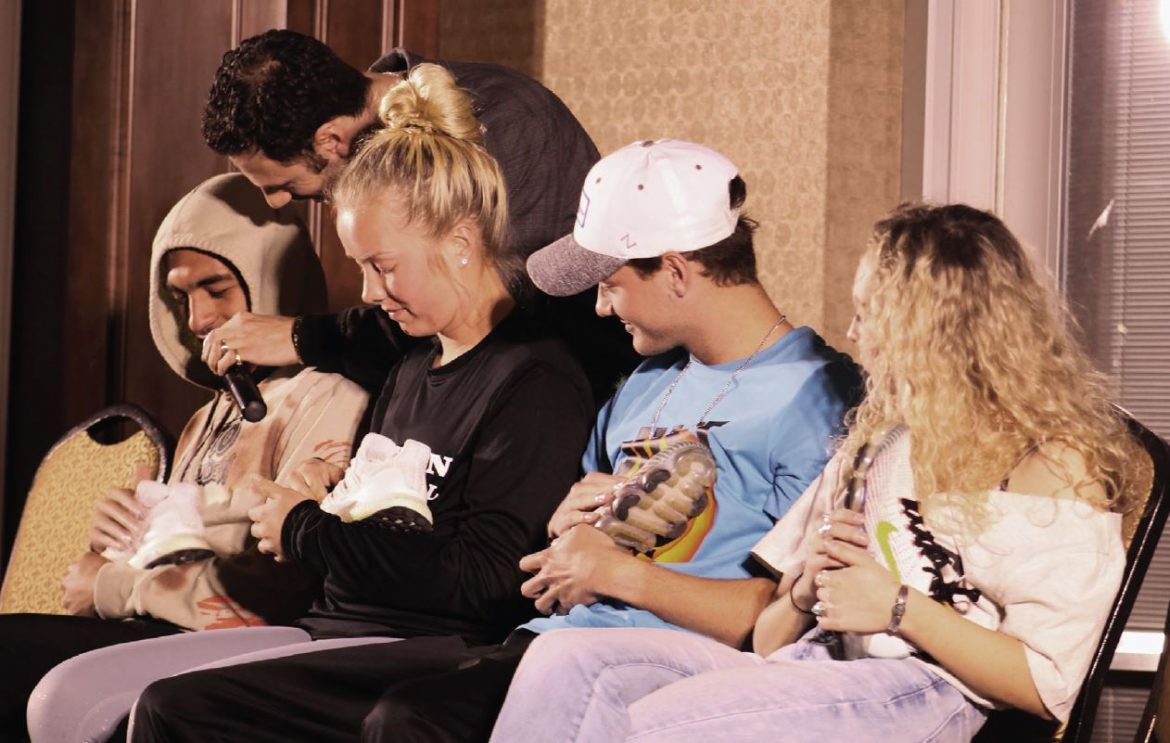 At 6:30 p.m. on March 9 in the McCasland Ballroom, the Programming Activities Council (PAC) hosted a hypnotist performance.

The hypnotist was David Anthony, an award-winning entertainer from Ohio. He entertains for corporate events, colleges, and universities events, and also does hypnosis consulting.

“Ladies and gentlemen, we are now going to start what is called the induction process,” Anthony said. “During this process, I will ask that you guys be as quiet as you possibly can. If you give these people up here the courtesy of being quiet for the next few moments, then we will give you a show unlike any other.”

After the induction process was complete, Anthony showed the volunteers were hypnotized by getting each one to fall asleep. Then, he hypnotized them to think that they were all famous rock stars and had them pretend to play an instrument of their choosing.

Sara Zimmerman said she was not expecting the hypnosis to work on her, but it did. She said she felt weird, and she described how she felt while under hypnosis.

Ajay Eseino said that although this was not his first time going to a hypnotist event, he said this one was better than the previous one he had attended.

“This one was more in front of friends,” Eseino said. “Usually sometimes you just got to sit and watch, and it was fun that you were able to be active and get in with it.”

Eseino said that it was enjoyable to be on stage and be a part of the performance.

“My favorite part was just like, just hearing everybody’s reaction,” Eseino said. “You were aware, and I could hear people laughing. It’s always fun having stuff enjoyable to do on campus. It’s always fun whenever we get the emails, or we see flyers for fun things to do. It gives us something to look forward to in the week.”

Brian Easter was one of the volunteers that went on stage to be hypnotized. He said he enjoyed going up on stage and getting hypnotized, and he was glad he had attended the performance.

“Some of my friends were going, and so I was like why not,” Easter said. “We all just came here and thought it would be fun. He was funny. This was really fun.”

Jadance Black is a part of PAC, a Cameron organization that frequently does events on campus, including some homecoming events.

“So, for homecoming week, we have our four events,” Black said. “We wanted to have one that was more interactive with the students. So, we brought in the hypnotist.”

Black also said that the Homecoming Dance is rescheduled for 9-12 p.m. on March 31.

“The dress code is anything you want,” Black said. “Just, clothes on. That’s it. Come to the Homecoming Dance! It will be a lot of fun!”