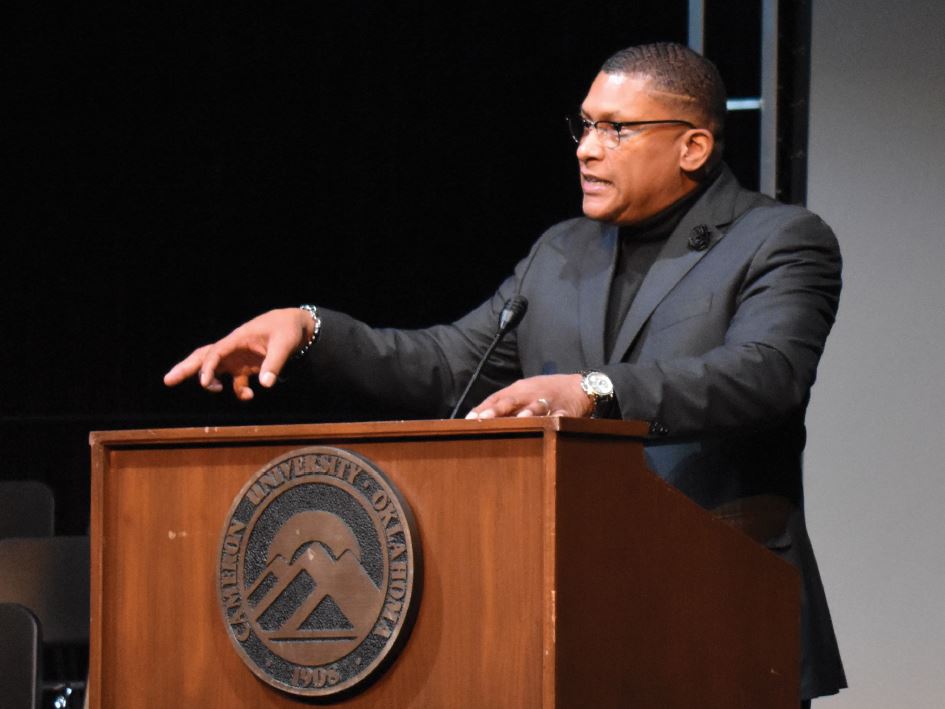 At 7 p.m. on Feb. 22,
inside the Cameron Theater, Cameron Campus Ministries held a celebration of Black History Month through rememberance of historical figures, key events and passages read by assorted Cameron students and faculty.

Along with the celebration, Pastor G.L. Wilbourn joined the festivities, and spoke at the event, specifically about Black health and wellness. It was his first time speaking to a college audience, and he mentioned how important that was to him.

“I’ll take this with me for the rest of my life,” he said. “Immediately coming into this place I realized speaking to a younger group of people, especially men, is that I’m not dressed right. I didn’t know you weren’t supposed to have socks on with dress shoes.”

Originally from El Dorado, Arkansas, Wilbourn and his family moved to the Lawton area nearly seven years ago from Ft. Worth, Texas.

Since then, he has become the Pastor of Mt. Calvary Missionary Baptist Church. He received his calling very early in life. “First it comes with a calling to actually preach the gospel,” he said. “There’s an extra conditioning for the heart for the love of gods people. Once that love is there, pastoring becomes easy.”

Wilbourn is avid supporter of the NAACP. He has spent the past three years as an active member, although he has been involved with the group for well over a decade at this point.

“It’s a great honor to be a part of an organization that has been apart of the grass-root movement for American Americans,” he said, “not for just African Americans, but for people of color and poor people here in this country to try and do what we can to equalize some of the systems in America.”