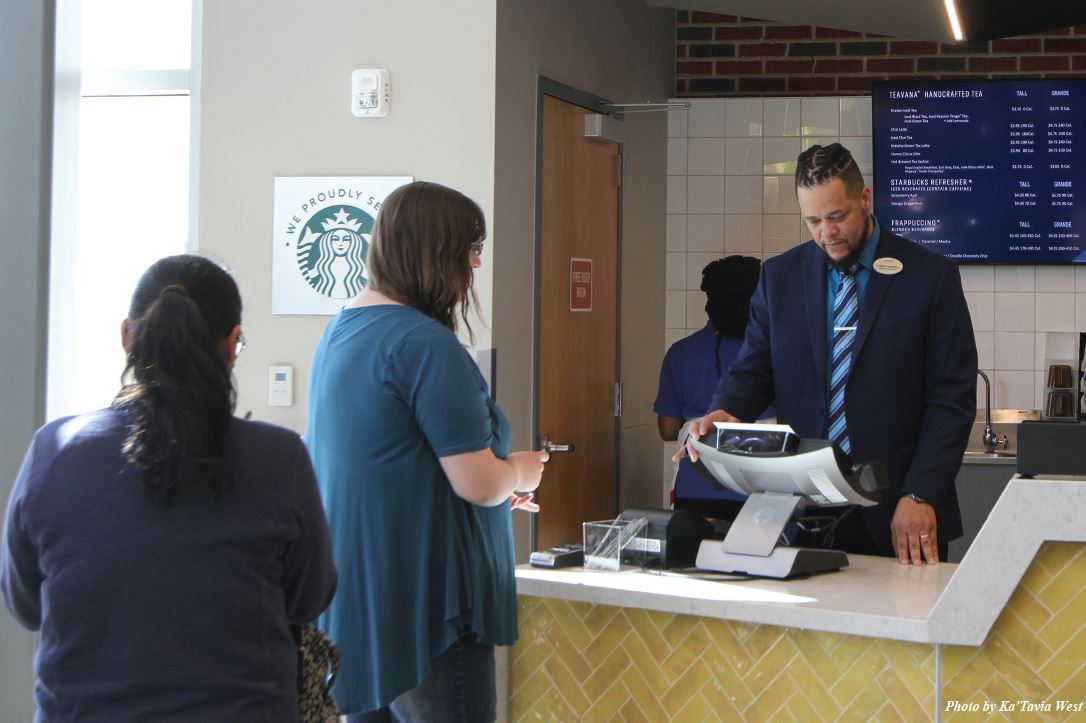 By Jackson Miller and Cam Alsbrook

After months of construction and years of planning, the Cameron University Library had a soft opening of the newly added wing to the facility at 10:30 a.m. on March 23, complete with prize drawings. Cameron students were once again able to walk through the familiar doors they have come to know without having to take the back entrance.

This newly built addition features a full-service coffee bar and an area near the main entrance where students can collaborate and work on projects with their peers, separate from the quieter bounds of the old main entrance. This way, everyone can get the learning experience they seek.

Seeking to comment on the matter was the General Manager of Cameron’s Dining Services, (Sodexo) Joseph Worrell.

“The location in the library, which is named ‘Aggie’s Books and Brew’ will be licensed to serve Starbucks coffee, just like the one in the McMahon Centennial Complex (MCC).”

Worrell also added that the new coffee shop features many of the other Starbucks signature drinks such as the Refreshers, Teavana Tea, and the Frappuccino blend beverage line.

One student who wished to speak on the subject was senior Skyler Miller, who likes the idea of having an open area for students to work with each other on projects while getting some sun.

“I think it will give the library a better vibe,” Miller said. “All of those study rooms in the back don’t have windows to my knowledge, and being able to look outside will make the experience more noteworthy and less depressing.”

Another student in attendance at the opening event was junior Richard Routon, who works in the library’s Digital Media Lab.

Although Routon is not a fan of coffee, he is just glad that the construction is done with.

“I am just glad that this project is over with,” Routon said. “We have a lot of projects still floating around, and I am glad that we have our old entrance back because I missed those doors.”

A person who has had direct involvement in the project itself was Dr. Margery Kingsley, the Associate Vice President for Academic Affairs.

Kingsley is the direct supervisor for the library staff and oversees the library facilities.

Kingsley’s main concern was how students would be able this new facility and how the design would seek to benefit those within the building itself, either aesthetically or physically.

“It has been exciting to plan a brand-new space like this and to think what it will offer for students and the Cameron community.” Kingsley said.

What separates this wing of the library from the other areas, aside from the open atmosphere for students, is the unique architecture showcased for everyone to see on the inside and out.

“The space is also an atrium, so there is a lot of light coming in,” Kingsley said. “It has high ceilings, bright colors, and even some cozy corners where patrons can eat and study.”

Another person who knows a great deal about the project is William Poole, a Library Senior Associate who has been working for Cameron University since 2014.

“The library was originally built in 1908,” Poole said, “so this isn’t even the first of the new additions.”

While noting the historical aspect of the building and the need for more space, Poole said that the best has yet to come regarding the remodel of the Cameron Library.

“This is only phase one,” Poole said. “In phase two, they are going to remodel the inside portion of the library and renovate the restrooms along with splitting the main lobby area down the middle to create two enclosed study rooms.”

“We conduct two surveys each year so the students can tell us what we can do better to serve them,” Poole said. “We sure look forward to hearing from the students.”

Students and faculty alike were welcome to attend the opening of Aggie’s Books and Brew at 10:30 a.m. on March 23 in the library.