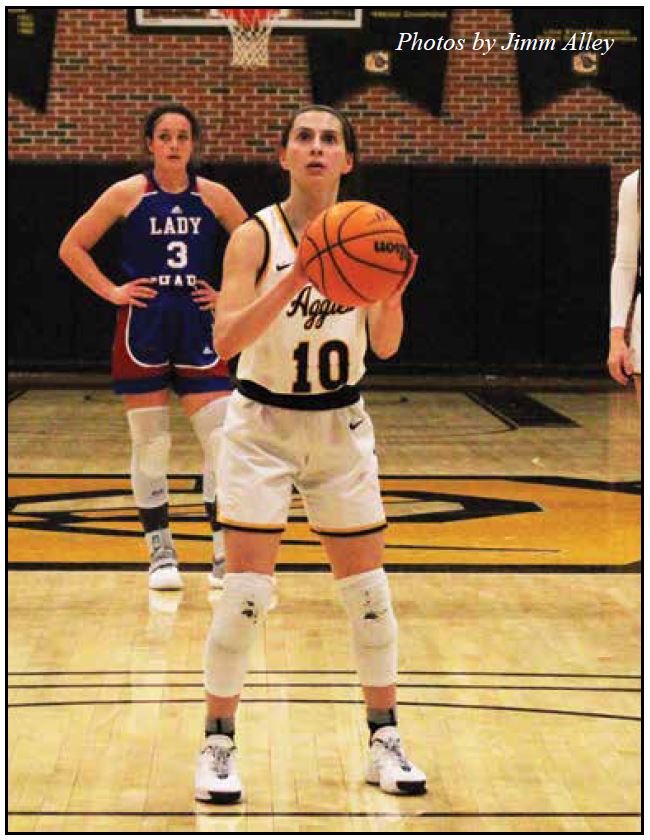 Katie King of the Aggie women’s basketball team came to Cameron from Harrah, Oklahoma, where she received all-state recognition and even won a state championship in 2017. King quickly fell in love with basketball at the young age of four and has not looked back ever since.

“I started playing in pre-k,” King said. “It’s been my life ever since then. I started playing AAU (Amateur Athletic Union) in third grade, so all of my years until now, I’ve been playing basketball.”

King is majoring in business, focusing on finance, and hopes to attend law school to become a corporate lawyer.

“I’ve got so many goals,” King said. “Like I wanna do this, this and this, but my main goal is to go to law school.”

When the time came to pick where she would play her college basketball, King said the decision to go to Cameron was an easy one.

“I loved the atmosphere when I first visited,” King said. “I loved the people, and it really just felt like home.”

In her two seasons at Cameron, King has shined on the court, averaging 10.8 points per game in her second campaign while also averaging three assists and 4.6 boards a game. Arguably her best game of the season came in an overtime victory against UT Tyler, in which King made 46 percent of her shots for 20 points while grabbing seven rebounds and three assists.

King has a big jump in her shooting numbers between her freshman and sophomore seasons. She was able to raise her overall field goal percentage up from 37.9 to 41.7 and drastically improved her three-point shooting going from 32.2 to 43.8.

Looking ahead to next season, King hopes to improve her offensive abilities even more as she steps into a more prominent role on the team in her Junior year.

“I need to improve to be a better offensive threat and score more,” King said. “ A lot of times I don’t, and I became really passive this year, but now as I’m getting ready to be a junior and a leader, I have the opportunity and the skill set to do that.”

King and the rest of the squad will have to find a way to make up for the team losing some of their senior players. She believes that they can continue their success even though there will be a transition to get used to.

“It’s gonna hurt us a little bit in the scoring aspect,” King said. “But I feel like we have the talent on our team that people can be an offensive threat and score more, so I feel once we get people’s confidence up, we’ll be fine.”

King put on a strong performance in the Aggies playoff games to finish off the season. Across their two games in the tournament, King scored 32 points total while hitting 42 percent of her shots and added 11 rebounds.

King and the Aggies are looking to build on another great season that ended with another appearance in the Lonestar Conference tournament and an overall 17-11 record, the team’s most wins since 2002.

King has a lot to be proud of from this past season, but it doesn’t seem to be good enough for her. She wants to keep building and improving to reach her full potential on the court and in the classroom. King is another in a long line of spectacular Aggie athletes with a very bright future ahead. If King can make the changes she is looking for; then opposing teams could have a lot of trouble on their hands next year.

For more information on women’s basketball and other Cameron athletics, visit cameronaggies.com.