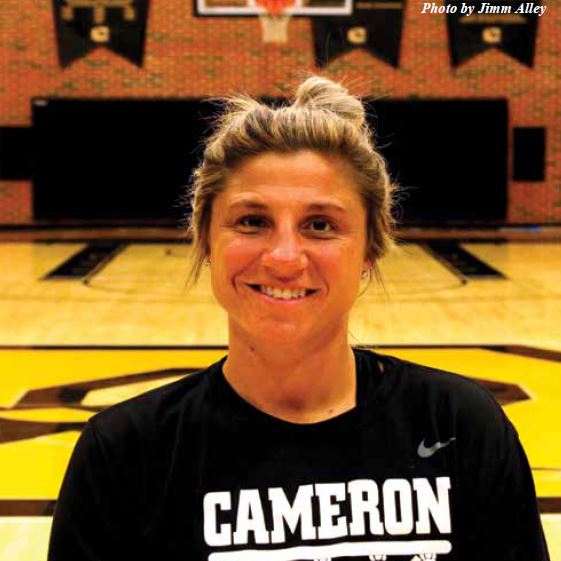 The Cameron University women’s basketball team finished last year’s season with an 11 – 8 record and was able to make it to the semifinals of the Lonestar Conference and NCAA DII championship tournaments, losing to number one ranked Lubbock Christian in both contests.

This season they hope to build on that success and make a run for a championship trophy. The Aggies are led by head coach Emma Andrews who is a former basketball player from Melbourne, Australia. Andrews is coming into her sixth season as the coach and she is still looking for ways to improve the way the team handles their games.

“A change of pace in our game has to be done better,” Andrews said. “Last year we amped it up which is why we won some games but teams will be expecting that this year, so we have to be able to go from extreme pressure, fast-paced basketball and be able to slow it down, control it and play fundamental basketball.”

One of the things Andrews wanted to focus on in the preseason was the team’s ability to manage the game at a pace that is favorable to them and their style of play and adapting to the situations in-game time. Improving the defense was also important to Andrews and being consistent in stopping opposing offenses.

“I think our defense is a lot better,” Andrews said “last year we just pressed and ran at people and created a lot of chaos because we hid some defensive things we had there, but I think this year we don’t have as many people that cant play and as many people as we have to hide. We can really switch up our defense.”

The Aggies have been working on a lot of new plays and were able to add pieces to their roster. Andrews hopes that the addition of some new weapons and implementing different presses can lead to a more well-rounded team and hopefully bring them more success.

Andrews has high expectations for this team heading into the new season and believes they have a good chance at getting a championship. “I wanna win a Lone Star Conference Championship,” Andrews said. “That is 100 percent my expectation, we have the personnel to do so we just gotta stay healthy, put the pieces together, and let these kids play, they have great basketball IQ and I think sometimes as coaches we try to do too much but this bunch can play through a lot.”

Andrews is very involved with her team and believes that what she gets from her team is what she puts in. Andrews describes her coaching style as “energetic” and works hard for her players to make sure they can be the best they can be. Whether it be helping with practice drills or giving them encouragement during games.

“Basketball is an avenue to have an impact on people’s lives,” Andrews said. “What I would want them to know is that they always have a family here, it’s important that every person that comes into my program and leaves my program knows that they will be a family forever.”

No matter how the season turns out for the Aggies Andrews wants her squad to remember that they should not worry about the small things. Win or lose she wants her team to remain on the course and finish the season as strong as possible.

“Keep working hard, keep going at it,” Andrews said. “We don’t need to post everything we don’t need to brag about it or stress about it, just keep going one moment at a time working better every day, and time will tell.”

It is clear to see Andrews has high hopes for the upcoming season but this team has proven they are up to the challenge. Last year’s success should make everyone optimistic for how this season will turn out, and if all goes as planned we will hopefully watch the Aggies win a championship.

For more information on Women’s basketball and all other Cameron Athletics please visit CameronAggies.com