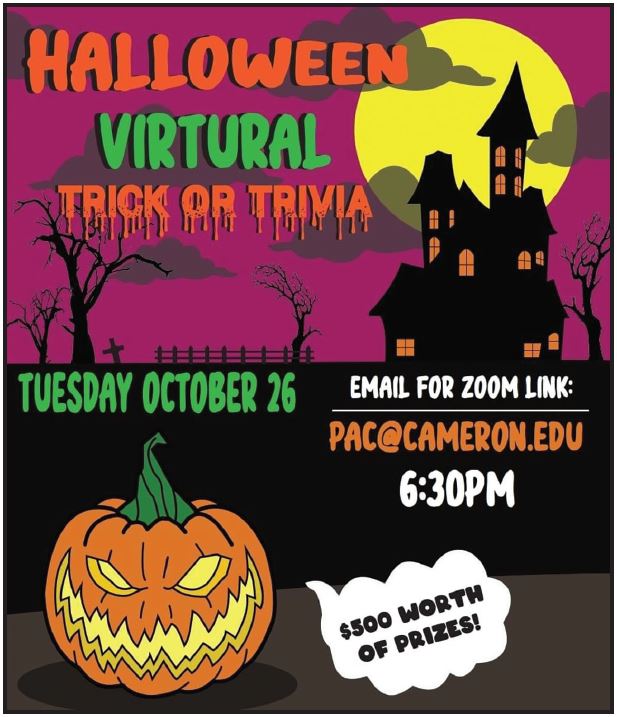 At 6:30 p.m. on Oct. 26 the Programming Activities Council (PAC) continued its festivities for their week of fun with a Halloween event of Trick or Trivia, a contest hosted by Scott Alexander via zoom.

The event consisted of 4 rounds of 15 questions, with first-place winning seventy-five dollars and second place winning fifty dollars in each round. The grand total amount awarded to students throughout the night was five hundred dollars!

Because the event was via zoom, participants had to answer questions on their phones, and points were determined by how fast contestants responded to each question.

Most questions were simple Halloween facts that most people know, but occasionally, a tricky question slipped in the mix.

And for the first time in Halloween Trick or Trivia history, the event had two contestants take first and second place for the first three rounds, surprising Alexander.

“We have a repeat,” Alexander said. “Have we ever had that in the history of Trick or Trivia? Double winners first and second place in a row same spots. No? That is a first, my goodness, that is a first!”

But that wasn’t the end of their winning streak. The same two contestants took the third round as well, proving themselves to be Halloween aficionados. However, in the fourth round, two new contestants broke their opponents’ streaks and triumphed as winners at the very end.

Alexander gave the contestants an entertaining show throughout the night with his corny Halloween jokes, fun magic tricks, and Halloween fun facts about Frankenstein, Count Dracula, and how Harry Houdini died.

“Fun fact, Harry Houdini actually did die on Halloween,” Alexander said. “He died not from one of his tricks but because someone had punched him in his stomach. It was said that Houdini could take a punch, so this college boxer asked Houdini if he could punch him, and he agreed. But, the guy hit him before he got ready, and it ruptured his appendix. He refused to go to the doctor for three days, doing shows when the ruptured appendix poisoned him, and he died of peritonitis.”

However, the most exciting fact of the night is when Alexander revealed to the contestants that he participated in Season 6 of America’s Got Talent in 2011 as a magician. He almost made it through the season, but unfortunately, was sent home in the quarterfinal round, placing him in sixth place for the season.

Now, Scott continues to focus on his skills as a magician, offering virtual showings on his website at scottthemagician.com.

For upcoming PAC events, students can visit their Cameron University page at www.cameron.edu/pac/ and their public Facebook page.