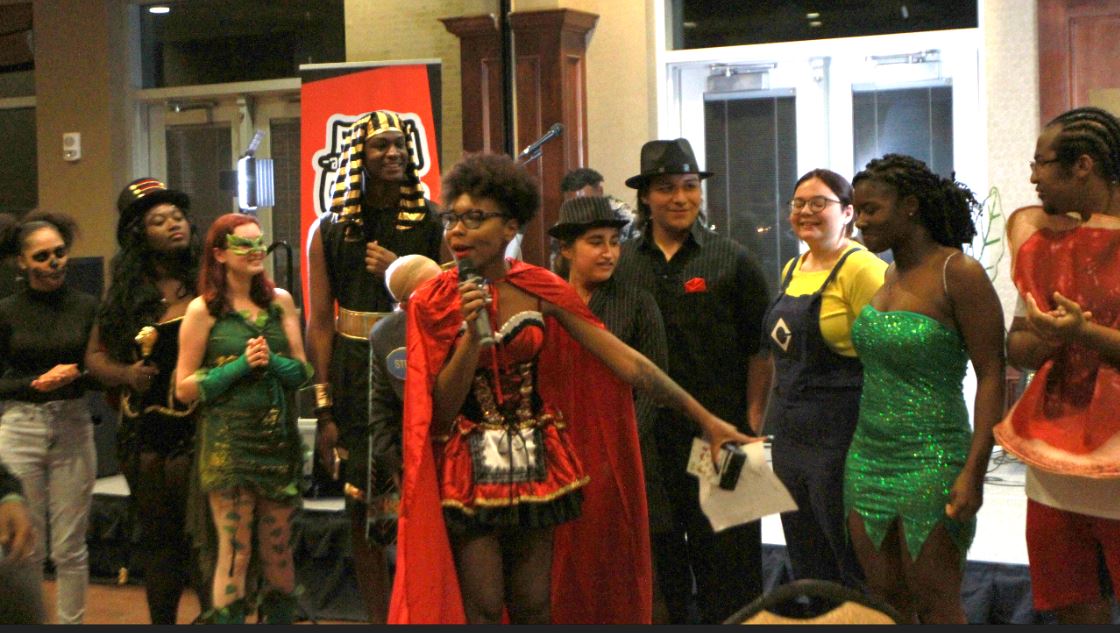 At 7 p.m. on Oct. 28 in the McCasland Ballroom in the McMahon Centennial Complex, Halloween Poetry and Chill took place.

Ka’Tavia West, the president of BSA, said that she decided to host Poetry and Chill because she wanted to bring an interactive musical event to Cameron.

“My favorite part of the event is the performances from students,” West said. “This is a safe place where we get to let loose and indulge in our craft, which could be anything from rap, poetry, or even telling jokes.”

Attendees at the Cameron Poetry and Chill event were able to sign up to perform and to compete in the costume contest as they walked in. Cupcakes, waters, and various sodas were available for people to enjoy while they perform.

Gregory II and the Poetry and Chill band took the stage initially. Gregory II presented a poem called “2020 Visions.” The poem brought up some important topics and questions that Gregory II asked the audience to consider.

“What side of history are you going to be on? Love or hate? Hate or love? Cause love is God, and God is love,” Gregory II said.

People did comedy, songs, played guitar, and read poems. Austin Pennypacker was the first of the performers, and he told a comedic, personal story about a very awkward date that went sour because his date found out that they were not compatible because of their astrology signs.

There was also a costume contest that occurred at the Poetry and Chill Event. Kevanna Thompson won first place with her Steve Harvey costume. There was also a multitude of other costumes such as peanut butter and jelly, Tinker Bell, Rhea Ripley, and a pharaoh.

After the costume contest, more performances took place. These included poems about being a good person, trust, sisterhood in college, and backstabbing friends.

Ambrosia Wilkett performed with her friend K-Mike on stage during open mic night.

“K-Mike dragged me out to sing the song that we wrote,” Wilkett said. “I was so anxious the whole time, but it was fun. I’m glad I did it. It was a lot of fun.”

Wilkett said that she likes that there is an open mic portion of the event. “Plus, once you sign up, you can continue to sign up throughout the night, so people can see how it is like and then they can decide if they want to do it.”