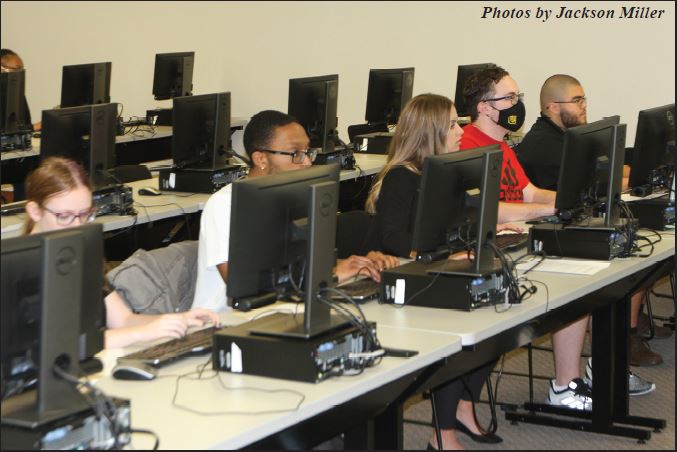 On Nov. 9, the Cameron Association of Computing Machinery hosted a programming event in Howell Hall for webpage design.

The purpose of the event was to assist students in developing a webpage using programs such as JavaScript and HTML for their business or cause.

The event was lectured by senior Elijah Proctor, who is the ACM club president.

Proctor led the event by discussing how to format and recreate the Google homepage using different programs, to give students a better comprehension of the world of coding.

Proctor added that the club hosts events such as this every month and that the council members of the club plan the details of the event for four weeks until that day comes.

“For the last event, the council members discussed an event about making a website, so we just talked about how to implement that,” Proctor said.

Although the club mainly deals with computer-related information such as coding, some of whom were in attendance, including Proctor, major in something that was not computer-related.

“I am majoring in Criminal Justice with a minor in Computer Science,” Proctor said. “I am also a tutor, so I have a passion for teaching people how to program.”

Another student that was in attendance was junior Alexis Rodriguez, who is also the ACM Club Vice President.

Rodriguez says that he helps coordinate club events with the help of Proctor, and even ran the last event which was a topic on how to recreate a video game.

“The second event that I help run involved creating a simplified version of a Mario game which was coded in C++,” Rodriguez said. “This was done using the SMFL Library.”

The club is sponsored by Dr. Chao Zhao, who is a professor here at Cameron. Zhao makes it clear that the benefits that students get by being in the club help further their education in ways that the traditional way of learning does not.

“Events like this help a student, not only academically, but also socially,” Zhao said, “because you try to develop a relationship or network, where students can make connections and friends.”

The Student Government Association also had a representative in attendance. Senior Sammie Powell is a non-traditional student, being at the age of 52. Despite this, he is still determined to learn new skills in programming with the hopes of staying one step ahead in today’s competitive labor market.

“The department has been really wonderful working with me” Powell said. “I am a little older than other folks, but the younger students keep me going.”

Powell says that he used to work as an insurance adjuster for several years and then went on to work for Serco.

However, it was after being laid off from this recent position that he decided to come back to school to pursue a degree in Computer Science.

“I already finished up my MBA, and I had enough credits to get a Computer Science degree,” Powell said. “So here I am.”

As for students who are in a similar predicament that he is in, Powell has some uplifting words of encouragement.

“Just work hard and be willing to work with other people,” Powell said, “and admit that when you don’t know something, get out, seek help, and most importantly, don’t give up.”

For more information about ACM club events and membership, you can contact Elijah Proctor at elijah.proctor@cameron.edu or Alexis Rodriguez at ar943651@cameron.edu.