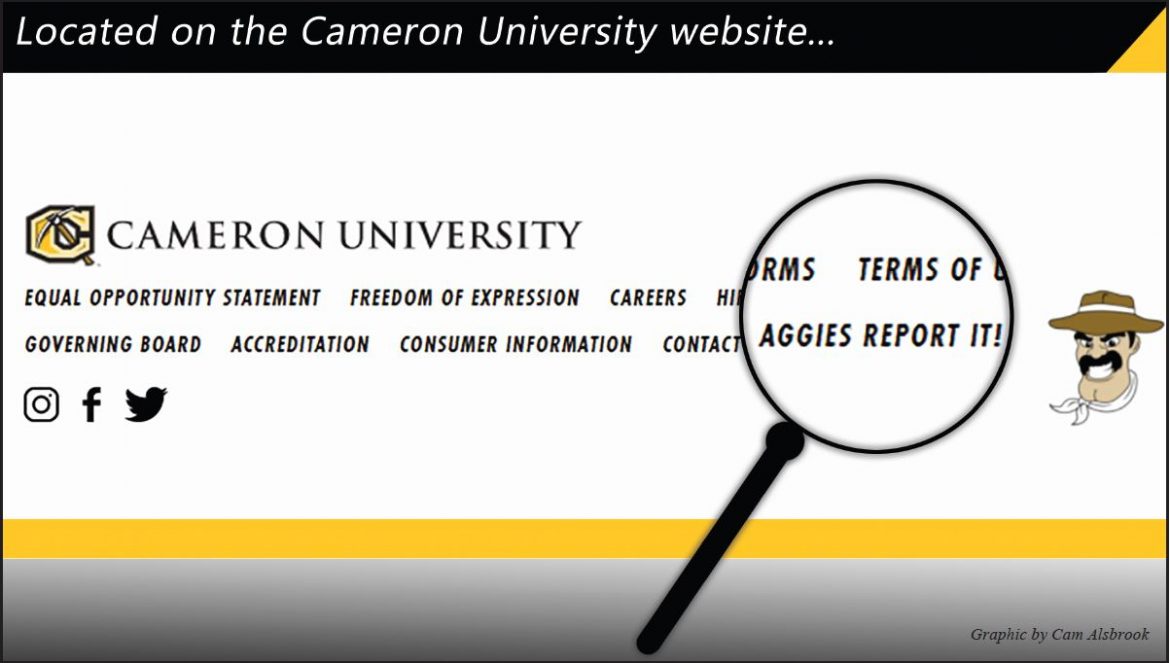 The Cameron website now includes a method of reporting cases that violate Cameron Core Values through a third-party service.

Prior to the implementation of the third-party software handled by “EthicsPoint” parties filing a report would do so through the Office of Equity Issues.

The new reporting method for Cameron is called the “Aggies Report It!” hotline and is located at the bottom of the Cameron website.

Senior Director of Public Affairs Keith Mitchell said the Oklahoma Board of Regents implemented the switch to EthicsPoint’s software about six to eight months ago.

“An effort was taken to develop what’s now called the ‘Aggies Report It hotline,’” Mitchell said, “and it provides a method for anyone on campus, whether it’s a student or whether it’s an employee or even if it’s someone who comes in contact with our campus community to report a variety of instances.

“The university, itself, is committed to integrity, respect and ethical behavior that goes back to our core values and our mission. If someone feels there’s been a violation of any of those, that’s what they can do through the Aggies Report It (hotline).”

Once a user proceeds through the “Aggies Report It!” link on the Cameron website, the user is re-directed to the third-party website run by EthicsPoint, where it gives the user a variety of different ways to address each situation.

As of Oct. 20, there have not been any cases reported through the hotline for the university, but Mitchell said he understands cases may arise as awareness of the hotline increases.

“And that’s perfectly OK,” Mitchell said. “I mean, that’s what we want, you know, if there’s some wrongdoing going on on campus, someone needs to be aware of it, and actions need to be taken to correct it.”

Mitchell said he recognizes issues are case-by-case on a spectrum from civil matters to criminal activity and policy violations.

“It’s a tough one, because it depends on what the infraction is,” Mitchell said. “It can range anywhere from possibly resulting in charges being filed to the other end. Maybe something as mild as a disciplinary action that does not result in termination but, you know, it could.

Since there’s a vast array of possible offenses each one could carry, it’s different.” Mitchell said that additional information could be found on the Cameron website.

“If it turns out that a professor is doing something unethical,” Mitchell said. “he or she could be terminated. If an employee is committing fraud against the university now we’re talking a criminal offense.”

People who use the service need to note that the hotline does not replace campus security or police for situations that require immediate aid.

For more information, visit the “Aggies Report It!” hotline at the bottom of the Cameron web page at
www.cameron.edu.