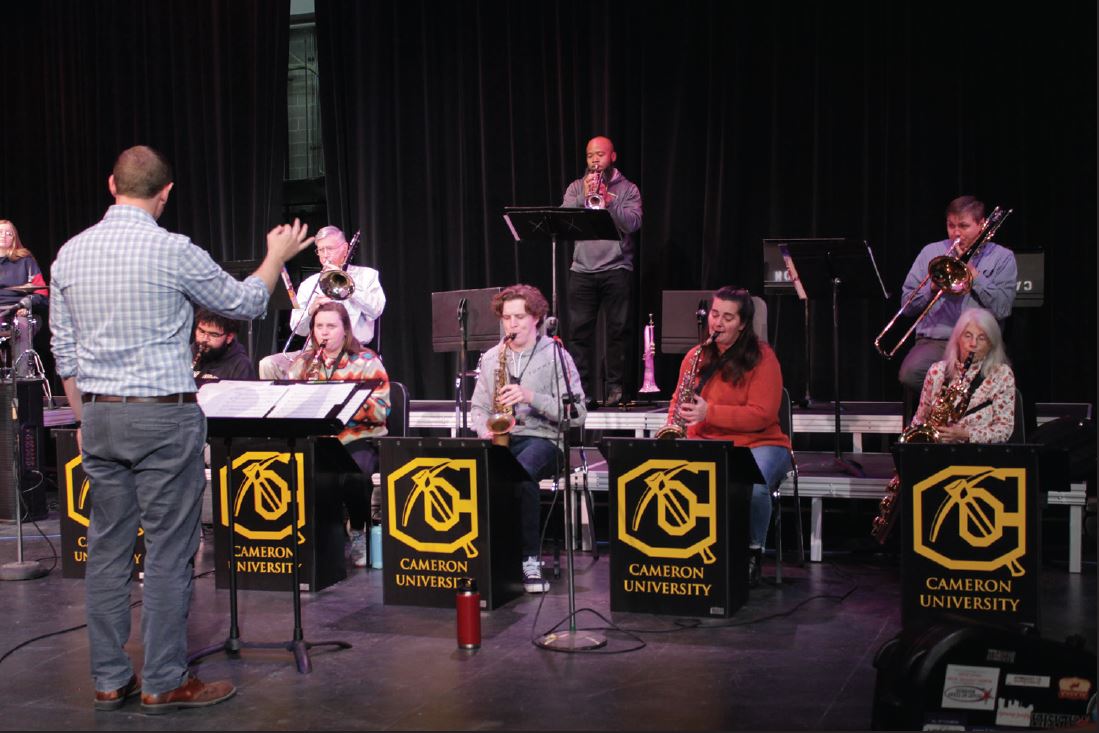 On Nov. 2 members of Cameron’s music department and the Lawton Orchestra accompanied Landon Dodd for a Country/Jazz fusion concert. This is an annual event happening on campus, and a big hit in the community.

While these two genres seem like an unlikely pairing, they are surprisingly complementary. Almost like yin and yang, the push and pull of these two styles are very satisfying. Jazz is mainly instrumental and thrives on the theme of an ideal urban lifestyle. Country, on the other hand, is vocal-driven and reminiscent of life in rural terrain. Their common thread is passion.

Musicians are known to be artists that are dedicated to their craft. No matter the genre or how much they are getting paid, many cannot live without it. The featured Artist, Landon Dodd, is no stranger to the stage. Dodd started playing music from a young age and even studied music at Abilene Christian University and Tarrant County College.

The Jazz Ensemble who accompanied him were mainly Cameron Students. As college students studying music, they have an opportunity to learn from someone who is successful in the business. Studying music at a higher level is very involved, and something that definitely requires a lot of passion to be successful.

I spoke to the director of the concert, Justin Little, who has been directing at Cameron for five years now.

“Prior to coming to Cameron I had never thought of combining country music with jazz,” he said. “But it’s remarkable how well the genres fit together.”

This style of music was inspired by a musician named Bob Wills. A country artist himself, Wills started to add jazz instruments to his band in the 1930s once that genre became popular. A new subgenre known as Western Swing was born and gave life to a very unique and distinct style of music.

Little also informed me that this will be the 41st annual Country/Jazz fusion concert to happen in Lawton. It has been a tradition held at Cameron since 1980 by Little’s predecessor, John Moots. Although it has been happening for many years, some have still never heard of the concert or the genre.

I spoke to Haley Moore, a student who attended the concert, about what she thought about the music.

“Honestly, I had never even heard of this genre before coming to the concert,” Moore said. “I’m not really a big fan of Jazz or Country, but it was unique and surprisingly good.”

Others who have never heard of this genre may be skeptical of it. Since it is not as common, especially in a large portion of the country, it is very easy to dismiss it without giving it a fair shot.

Little encouraged these skeptics to break it down in order to understand it better and enjoy it more.

“If you are a fan of country music, the jazz band will just enhance the aural palette,” he said. “If you’re a fan of jazz music, we will still have some favorite standards you will recognize, and all the characteristics of jazz are still there.”

They played many classics like “Chattanooga Choo Choo”, “San Antonio Rose”, “You’re Nobody ‘Till Somebody Loves You”, and “On the Road Again”. These familiar songs helped the audience to be more receptive to something they may not have experienced before. The concert is sure to continue to draw a crowd for years to come.