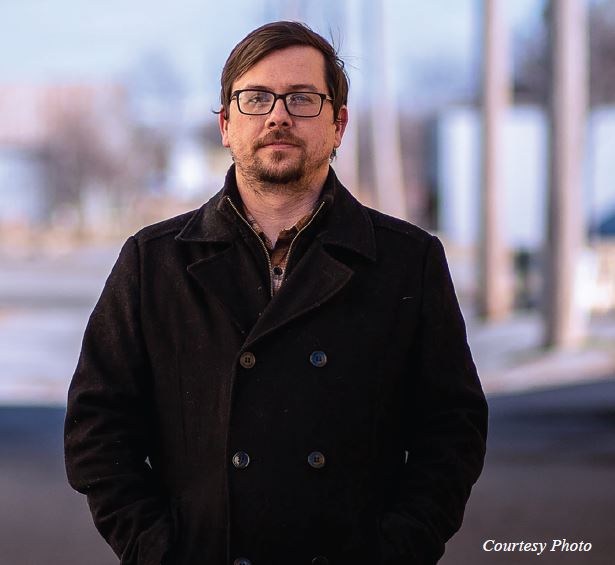 At 7 p.m. on Oct. 8 in the McCasland Ballroom Gary Reddin read a variety of work as part of Cameron’s Visting Writer’s Series.

Reddin is a Cameron alumnus who has published works in “Essay Daily”, “Stoneboat”, “Dragon Poet Review”, and “The Dillydoun Review.”

Reddin is an editor for “The Oklahoma Review”, “580 Monthly Magazine”, and the senior arts and entertainment writer for “the Lawton Constitution.”

Associate Professor Leah Chaffins introduced Reddin at the event and said that he is not only a writer, but also an editor who works on podcasts, helps with film festivals, and mentors other aspiring writers.

Reddin started by thanking everyone for attending the event, and by thanking the CU Department of Communication, English and Foreign Languages for hosting the event. Then, he began talking about how he started writing.

Reddin once considered himself to be a fiction writer, until he went to one of Cameron’s visiting writer’s series and met a writer who read fiction and poetry. That caused him to realize that a writer can do more than one form of writing.

He now considers himself to be form agnostic. “I got to the point where, I sort of just threw form out the window,” Reddin said. “I don’t like to put my writing into a box. I don’t like just sticking to one thing.”

Reddin said that he has always been a writer, and that writing is something that he feels that he has to do, but he does not limit himself on what type of writing he chooses to do.

He does a variety. “I think that if people just accept that they can step outside of that box, then they will be much more comfortable with themselves as a writer,” Reddin said.

Reddin has published a poetry chapbook called “An Abridged History of American Violence,” which is a book that he actually started writing while he was a student at Cameron in Dr. John Morris’s Poetry class.

Morris published this chapbook through his small press.

The first poem that Reddin read was one that he had written while he was a student at Cameron in one of Morris’ classes. It was called “The Going Price of Venom,” and it had won the firstplace prize for the poetry contest at Cameron.

Reddin also read the poems “American IV,” “The Church of September,” “American I” and “Empire,” which can be found in his chapbook “An Abridged History of American Violence.” “Writing has always been an outlet for me,” Reddin said.

“I think that it’s, in some ways, a trauma response. Some of my writing does tend to come out a little bit darker than my personality if you know me.”

Reddin then decided to read a piece of flash nonfiction that he wrote for a project called “Midwessay,” which can be found at http://www.essaydaily. org/2021/07/the-midwessay-garyreddin-fish-heads-on.html.

Next, he decided to read an article that he initially wrote for the Lawton Constitution called “Food is Everything.”

The article was about how Reddin ate his way through the International Festival, enjoying everything from gyros to shark on a stick. “The language of food. The shish kebob of culture and cuisine. This is America.” Reddin said.

The last work that Reddin read was a piece of fiction called “The Wolf of Locus Grove,” Reddin then thanked everyone once more for coming to the event and said that he was happy to finally get to read to people again.

Attendee Cameron Admissions Coordinator Jenn Castricone said that she wishes that more people would come to events on campus and that she thought that the reading was lovely.

“I have been Facebook friends with Gary for a long time,” Castricone said. “And I already have the chapbook, and so I wanted to come and see him sort of perform his works I guess.”

For more information, contact Cameron’s Department of Communication, English, and Foreign Languages at (580) 581-2272, and watch for press releases on the Cameron Website.